Hello to all you jersey wearing, helmet bumping, pork roasting, beer buying, tailgate hopping, service availability surfing, side-bet making, black & red doning, Utah-By-5 chanting, "Are you ready for some football?!?" enthusiasts! This blog entry is being posted a few hours before the big TCU vs. Utah football game this afternoon up at Rice-Eccles, while will ultimately determine the Mountain West champion and probably give the winner a shot at a national title as the rest of their respective schedules are a breeze. While I didn't go to the U myself I still love a good clash and root for home when I can. Not gonna deny, it kinda sucks being us if you've watched every sports analysis this week, we're going in to battle a team that is statistically higher. But that just makes us the underdog today and its sure as hell a lot more fun rooting for the unexpected winner. If we win, badass! If we lose, take to heart the idea that it took a team like that to knock us down. Before we dive in here's a new look (and by new I mean finished earlier today) of the 337 Memorial Wall.

--- Big news to get into right off the bat, as of this week the Utah Arts Festival is officially taking submissions for ALL categories! By clicking on this link right here, you can go directly to the submissions section where they're currently looking for people in Performing Arts, Visual Arts, The Artist Marketplace, Culinary Arts, the Fear No Film section, and volunteers for all four days. Performing arts includes Music, Dance, Street Theater and Literary. Now... with that said, time to be blunt. LOCAL BANDS! Every year, without fail, thirty or more of you come up and complain that you want to be a part of it and then never sign up. This is where you sign up! If you don't, you have no room to complain. Not to mention the hundreds of localized artists we have who fit the criteria across the board. Sign up today, I believe you only have until January to complete the form, and we'll see you in June.

Speaking of music, down yonder in Utah County the first of two big competitions kick off. Muse Music will start its annual Battle Of The Bands this Monday, six straight days of music with some of the freshest and finest groups in the area. Usually one of the highest attended showcases of the year, the first five nights will see 3-4 bands playing one after another to try to earn your votes, culminating on Saturday night with the finalists who go the most votes to crown a winner. I don't really have details on the prize at the moment, but $5 a night to see so many groups isn't a bad deal at all. Head on over and check it out! I don't really have a poster for this show, so here's a picture of Vinyl Club winning an over-sized check sometime last year.

Moving to film, this coming Thursday will see a huge annual event for SpyHop Productions as the eight annual PitchNic World Premiere makes its return. Four brand new movies from the minds of students of the film program make their debut this coming week over at The Rose Wagner. If you've ever been to one you know that these kids tend to present material that can put seasoned college kids to shame. Do yourself a favor and go check them out. All four films just $6.50.

Moving onto fashion, next Saturday will see the arrival of The Girly Show over at Trolley Square. Specifically the Association Of Fashion Designers in conjunction with The Hive Gallery, will present a runway show from 5-9PM in the atrium (south side entrance). Aside from a "style wars" competition for local designers, it will also feature an "Apprentice Spotlight" feature for up-and-coming designers, and a runway showcase for AFD members. Did we mention its free? Should be an interesting evening for all.

As a side note, one play we didn't get to due to scheduling was Salt Lake Acting Company's presentation of boom. The play's focus is on two people caught post-apocalyptic together in a situation where they need to repopulate the earth, with your fair amount of hilarious consequences along the way. The play kicked off this past Wednesday to some rave reviews and looks to be a nice piece to end out 2010, but only for a month. Head on over and check out a showing before it vanishes from the stage. 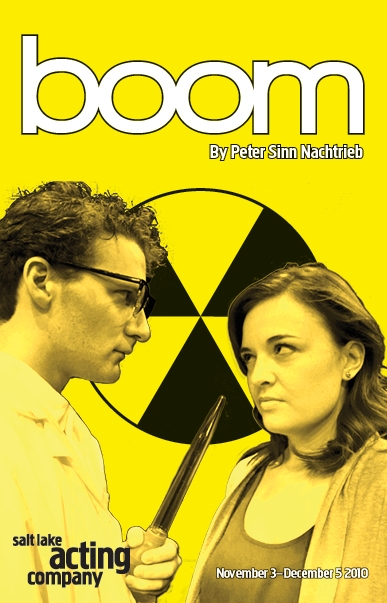 A bit of a short week of events as a whole. Most of the rest is a bit on the fence and happening in the later half so look forward to more in a few weeks. As for the blog... we'll talk the comeback of a record label, an award winning graffiti artist, hit up an acclaimed gallery under new su

pervision, chat with a radio host, explore music video making and we'll hit up another concert. At least, that is the hope as we continually move things around and enter the ever turbulent holiday season. Always a treat trying to chat with people as they pull hair and frantically prepare for the last six weeks of the year. As always, we'll see what happens.