Saturday, Nov. 6: Ogden’s Junction City Roller Dolls played their final bout of the 2010 season at Layton’s Davis Conference Center in front of a full house, not to mention Grizzbee and Stan Bird.---

JCRD’s two home teams, the Hilltop Aces and the Railway Banditas, aren’t so much teams as brands, since members of the league rotate in and out of the two every game. Over JCRD’s eight-month 2010 season, the Aces brand has won more bouts than the Banditas brand—it was on the ladies in black to finally prove themselves. Or their brand. Or something.

Star JCRD jammers Sarin Gasp and Zelda Cruz toed the line for the Hilltop Aces and the Railway Banditas, respectively, at the first whistle. By mid-period, it was clear that tonight’s Banditas were the best of the season, dominating defensively and offensively, with a 22-7 lead. Sarin Gasp briefly evened up the score with a 15-point jam, but the Aces couldn’t hold onto the tie with Banditas jammers Zelda Cruz, Wee Smasha, Penny Slain and Tic Tac Flo pumping up the score.

In Period 2, Hilltop Aces jammer Malibu Harpy screamed out of the gate with a 15-point jam, which was soon answered with an equal-point jam by Railway Bandita Elizabitch Taylor, and then back again with 18 points from Ace Sarin Gasp. Unlike the pathetic display by the University of Utah Utes earlier in Salt Lake City (how much do we care about that BCS “conspiracy” now?), the score seesawed for the remainder of the bout; Wreck N’ Glamour pulled the Aces up to 110 to the Banditas’ 116 in the final minutes. The last jam, which pitted Banditas captain Harry Slaughter against the Aces’ Sarin Gasp, would have been tough to call—if Sarin hadn’t lost a skate wheel and effectively taken herself out of the game, leaving her opponent to score at will.

The Junction City Roller Dolls’ 2011 season kicks off in March; tryouts will be held in January. Info: JCRDolls.com. 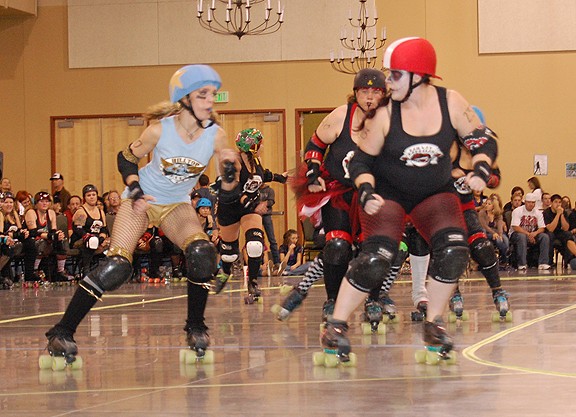