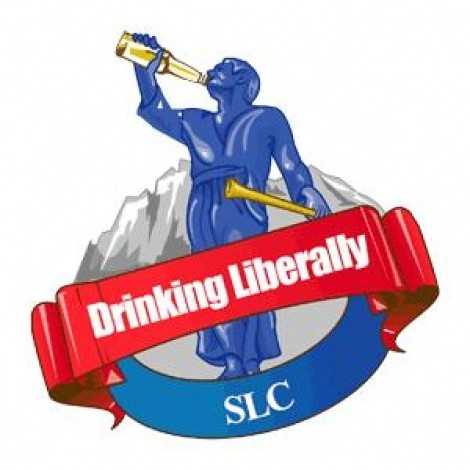 Like many lefties, I've spent the past 10 days in the throes of depression, barely able to face a world in which radical right-wingers in the House are poised to take down my man, my President Barack Obama, using whatever slimy, corrupt means necessary.---

So, when my sister-in-law Susan invited me out Friday evening to a meeting of like-minded folks, I figured it might be a good chance to commiserate, or at least make sense of the whole thing*.

It was an evening of many firsts for me: My first visit to Piper Down, my first plate of "pub-style curry," and the first time I'd attended a Drinking Liberally event.

Rating these three firsts, in order:

Piper Down: Frankly, I can't believe I've never been there before. It's got the kind of warm, woody, low-key atmosphere that makes me feel right at home. The covered smoking patio is particularly good, with a nice, centrally located gas fireplace. There's no ridiculous high-dB dance music blaring; it's the kind of place you can carry on a conversation. The service is prompt, competent and unobtrusive. A-plus

Pub-style Curry: The menu said the recipe or concept came from the sole pub in a Scottish town. It's a mild yellow Thai-style curry sauce with chicken, served over Piper Down's crisp, fluffy french fries. The bartender wouldn't personally recommend it -- and I can see how it might not appeal to every palate -- but it's the first time I've seen any kind of curry offered as pub food, and I liked it just fine. Could have been a bit spicier. B

Drinking Liberally: I've seen these meetings (or convocations, or whatever they're called) for some time in the City Weekly event listings, and I've been curious about them. Susan and I arrived around 6:20 p.m., which to me seemed impossibly early for a Friday night, but it turned out to be a good thing -- the backroom was already filling up, the tables were completely occupied, and we were lucky to get two seats at the bar.

The schmoozing period officially commenced at 6:30. To tell the truth, I get a bit overwhelmed among crowds of strangers, and sometimes it's difficult for me to know what to say. Basically, I always end up looking like an idiot at these things. At one point, an outgoing woman grabbed my hair and demanded, "Why do you wear it so long?" The best I could come up with was, "I like it that way." Yeah, I'm a real smooth and clever conversationalist.

Still, I liked this woman, and our conversation quickly turned to the plight of cancer patients and sufferers of congenital atrichia (she pointed out that I could grow my hair even longer and then donate it to Locks of Love). I mentioned how I liked to crochet the kinds of beanies that are sometimes worn by cancer patients, and it turned out she was also a devotee of the fiber arts. Her husband high-fived me. They were both terrific, and I hope we meet again.

I had to get a nicotine fix before the speaker started, so I stepped out onto the aforementioned wonderful smoking patio, where I met a young gentleman who apparently is a DL regular. After I established myself as a DL virgin, he asked me whether or not I'm "involved" politically.

Again, I was buffaloed. How do I answer that question? I've voted in every election for the past 20 years (it would have been 24, except I was out of town during the 1992 general). I request lawn signs. I wear political badges. Before I became a morose, infrequent blogger, I wrote a lot of lefty columns in the local alt-press, and I used to show up to protests and demonstrations before they started to depress me.

But it's been decades since I dialed for a political campaign. I've never collected signatures on a petition. The only election-night party I ever attended was in the '90s, and then it was only the Republican one because I was assigned to cover it for the Chrony.

Insufficiently able to justify my "involvement" cred, I gabbled something incoherent about LGBT issues and then got the hell out of there. I'm pretty sure the young gentleman was mystified by my odd response -- but, as I say, I get nervous in strange crowds.

Evidently, I'm not the only one depressed about Nov. 2. Among my fellow liberals, there was a good measure of grousing and finger-pointing

The DL organizers kindly delayed the speech until the clock ran out on another one of those phenomenal late-game comebacks the Jazz have been making lately. (Jazz 90, Hawks 86 -- whoop whoop!)

The evening's speaker was Dr. Tim Chambless from the University of Utah poly-sci department. (Chambless is a man of many parts, but Channel 9 aficionados know him from his telecourse lectures, and a great many U alumni remember his exciting American National Government course -- which lured people in with the promise of satisfying the AI undergraduate requirement, but with its spirited in-class discussions, spawned many an unwitting political junkie.)

Chambless is at his best when directing these spirited discussions and, after some brief introductory remarks about gerrymandering, voter turnout and the Democrats' recent electoral shellacking, invoked a Q&A session.

Evidently, I'm not the only one depressed about Nov. 2. Among my fellow liberals, there was a good measure of grousing and finger-pointing. Poor Rep. Jim Matheson can't do anything right, although as Chambless pointed out, Matheson's district -- bordering on Wyoming, Colorado, Arizona and Nevada, and even corner-adjacent to New Mexico -- was designed by Republicans expressly to make him lose elections. (Despite limitations, I'm convinced Matheson does his best -- and is a damned sight better than the alternative.)

At one point, I even heard somebody mutter "gay rights" as a reason Democrats no longer win in Utah as they did 50 years ago. I'm fairly certain this random person in the crowd was offering an academic example rather than suggesting the UDP should jettison the gays as it did during the late-'80s/early-'90s -- but if not, I would like to invite that person to screw himself. The LGBT community is one of the most consistently active, faithful Democratic constituencies going. These days, it even has some political heft, particularly in Salt Lake County, where you may piss off the gays at your own risk.

As the discussion bounced from topic to topic, I was gratified to see a growing amount of passion and energy mounting up. Frustration and anger borne of the 2010 shellacking may actually serve us well in 2012.

But, for me, the take-away message was that the main issue facing progressives in Utah right now is not apportionment, but voter participation. There's not much we can do about the imminent gerrymandering. But we can sure as hell do better than a 33-percent turnout of eligible voters -- which put Utah among the Bottom 5 states in the nation during this past midterm.

Yeah, education and outreach programs are needed -- and they'll pay off over the long run. But I think the reason conservatives continually shellac, varnish and laminate us every election is simply because they're so damned organized. When that first Tuesday after the first Monday in November rolls around, they're on it -- with Dalek-like precision, they converge on the polls and cast their single-party ballots on those closed-source Diebold electronic voting machines. So the robots win every time.

The rest of us? Well, there are many progressives who lead lives that are best described as "creative." Lots of times, it's not easy to predict exactly what we'll be up to on a given Tuesday. Too hungover to go to the polls? Possibly -- or else maybe we'll be so inspired and caught up in the creative process that we'll simply forget about Election Day. Hey, it happens. Not everybody monitors CNN, msnbc and FoxNews as an 18-hour-per-day hobby. Some of us would rather read Proust or some damned thing like that.

At one point during the discussion, there was much hand-wringing over the fact that a lot of people don't know the names of their state rep and senator. We all had to raise our hands to indicate whether or not we were privy to this gnosis. I raised my arm and then immediately lowered it, since I was no longer 100-percent sure that "McAdams and Briscoe" was still the correct answer (turned out it was).

Now, it is indeed a shameful state of affairs when an eligible voter cannot identify her duly elected representatives. Tut-tut. But it's not as if this information is very useful in day-to-day life. And, in the end, what difference does it make? A voter's basic humanitarian outlook doesn't change depending on her knowledge of election outcomes. Political geeks care about that shit, but the rest of us simply want social justice and a fair paycheck. And we'd vote for it, too, if we could be bothered to show up to the polls on a specific day.

Salt Lake County has a permanent-vote-by-mail program that is, in a long-bygone parlance, da bomb. Signing up is very easy. Thereafter, you receive your ballot in the mail three weeks in advance of every election. It gives a disorganized lefty plenty of time to procrastinate and hem-and-haw and have inspired moments before actually casting her vote.

Getting progressives to sign up for vote-by-mail will take much less effort than any massive campaign to educate them about democracy -- and, I believe, will have a much more powerful effect on voter turnout. B-plus

* Since Dave and I cannot legally be married in Utah, I sometimes call Susan my "sister-out-of-law."