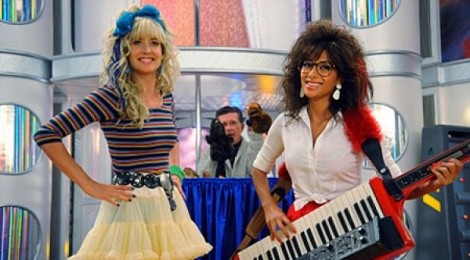 Last night’s premiere of Sarah Palin’s Alaska broke TLC records with around 5 million viewers. Between this and the equally inexplicable Sister Wives phenomenon, the little people had better find a new channel. ---

What’s new tonight:
How I Met Your Mother (CBS) No matter how tedious HIMYM gets—and it’s happened more this season than any previous—you can always count on the little callbacks to deliver the laughs. Robin’s (Cobie Smulders—seen this month’s Maxim?) past as a Canadian Hannah Montana is a bottomless well of funny, and tonight we learn that her “Robin Sparkles” alter-ego once starred in a kiddie show called Space Teens with fellow Canuck pop star “Jessica Glitter” (Nicole Scherzinger of the Pussycat Dolls). CBS should cancel Mike & Molly and produce a weekly Robin Sparkles Show in its place. Or just cancel Mike & Molly and run a test pattern. I’m good with either.

Chuck (NBC) If it’s November Sweeps, it must be time for even more Chuck stunt-casting than usual—batting tonight are Rob Riggle (The Daily Show) and Summer Glau (Terminator: The Sarah Connor Chronicles, Firefly). Chuck-heads may want to start watching their favorite show even harder: Last week’s propaganda hour, er, NBC News interview with “author” George W. Bush in this timeslot grabbed about the same ratings as an average Chuck episode. Who would have thought Dubya and Sarah Palin would be this fall’s breakout TV stars? Besides Satan, that is?

Weeds (Showtime) Season Finale: Read all about it in True TV (Item 3).

The Big C (Showtime) Season Finale: Read all about it in True TV (Item 3).

Preview: Robin Sparkles and Jessica Glitter liven up How I Met Your Mother, eh.