Velour's 2010 Winter Battle of the Bands

People crowded into Velour in Provo, Utah on Sunday night to witness Utah County's cream of the crop bands battle it out with their instruments of choice. --- The combination of an all-ages audience, no booze, and the stain glass windows behind the stage almost made the event seem like a church social. However, when the smoke machine started blanketing the crowd with a misty cloud of obscurity and the bands began to play, it was anything but a religious affair. In fact, it was quite an impressive gathering of talent.

Five bands played for a chance at a stocking full of prizes, including a cash pot, a percentage of the admission, free recording sessions at 29th Street Studios, a photoshoot with Jake Buntjer, and more. Ryan Innes, Seafinch, Prince of Wales, Holy Water Buffalo, and Jennifer Blosil each had 25 minutes to impress the audience and a panel of roughly 12 judges. The judges—including KRCL's Ebay Jamil Hamilton, North Platte Records' Mckay Stevens, 29th Street's Ben Sorenson and City Weekly's Gavin Sheehan—scored the bands on musicianship, vocal performance, composition, and overall badassness. A few random, lucky fans were also given a chance to vote.

Opener Ryan Innes came on strong with his very smooth and rich vocals. The band had a very jazz and blues feel. At times while the band played their short set, it seemed like the singer's vocals outshone the accompanying instruments.

The five-piece Seafinch provided a contrast to the opener. The lead singer's whispery vocals, which he accompanied with acoustic guitar, brought to mind artists like Ray LaMontagne and Bon Iver, but with suggestively religious undertones and lyrics.

The rather underwhelming Prince of Wales went third. The generic pop- creatively involved the audience by handing out plush toys, but when it came to stage presence, they were uninspiring. Their discordant and unsynchronized melodies came off sounding like a bad imitation of bands like Straylight Run and Panic at the Disco.

By the time Holy Water Buffalo came on, the crowd was ready for something heavy. The lead singer's baby face and long golden-locks didn't exactly inspire confidence, but when he started shredding his guitar, all doubts evaporated. Holy Water Buffalo is good old-school rock 'n roll with a touch of country twang.

Like the James Brown song "It's a Man's World," this is why if you’re a woman in the music industry you have to be an incredibly strong contender and performer to compete. (Or just reveal a lot of skin.)The petite Jennifer Blosil was the last to perform and didn't reveal any skin, but relied on the strength of her voice. As her hands stroked the keys of the piano and she began to sing, the crowd quieted to listen. Blosil's vocals were by far the strongest of the night. Her vocal range was as outrageous as her blond afro, and the blues and soul in her song compositions were very like British songwriters and songbirds Adele and Amy Winehouse.

At the end of the evening while the votes and numbers were being tallied, the floor became the center of a dry dance party. Youngsters danced to Passion Pit while others mixed and mingled. Holy Water Buffalo was announced the winner of the festivities, but PR Director and host of the event, Kaneischa Johnson declared, "That all the bands were still winners." Regardless, the night was a raging success and it put some Utah County (or in Holy Water Buffalo's case Wasatch County) bands on Salt Lake's and CW's radar. It would appear that Provo does indeed have something else to offer besides cougar fans and decaffeinated beverages. (Check out over 400 photos from the entire evening in this gallery.) 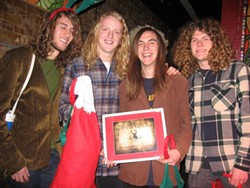