Today, two new spokeswomen were announced, so they could begin "spokesing" on behalf of their bosses:---

Ally Isom, a Kaysville City Councilwoman, will serve as the governor's new chief of staff and spokeswoman. Isom is the director of government affairs for Utah Department of Workforce Services and has served as deputy director of the Utah Department of Community and Culture. Previously, she handled public affairs for R&R Partners ad agency and managed the statewide campaigns for Utah Attorney General Mark Shurtleff. Isom is married to Eric Isom, Qwest's government affairs director, and has four children. 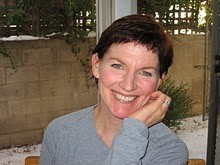 Holly Mullen, former City Weekly editor (2007-09) and a Salt Lake Tribune columnist for 10 years before that, will serve as communications coordinator for the Utah Democratic House members. According to a job description previously posted on the Utah State Democratic Party Website, the coordinator works under the House Minority Leader (currently Rep. David Litvack) to develop "strategy, media plan and messaging," respond to the governor’s State of the State address, maintain the House Democratic Website and blog, and generally make the House Dems look good.

Mullen is married to former Salt Lake City mayor--now Gov. Herbert's state environmental adviser--Ted Wilson, and she most recently was a candidate for a Salt Lake County Council seat.

Mullen joins a tribe of journalists morphing into government spokespersons, most recently including Joe Pyrah, former government reporter at The Daily Herald in Provo since 2004 and Sausage Grinder blogger, who will serve as the new chief deputy of the House under House Speaker-elect Rebecca Lockhart, essentially Mullen's counterpart on the majority side.

Also announced on the Dem's Website as the new communications manager/press secretary for Utah Senate Democrats will be Bryan Schott, currently managing editor for online information portals Utah Policy/Utah Pulse and the former news editor for KCPW 88.3 public radio (his counterpart in the Senate on the majority side is Chief Deputy Ric Cantrell, a nonjournalist).

Other journos (top of mind) who long ago enlisted into guv'ment service include:

Angie Welling, former D-News reporter, who became the Utah Department of Corrections spokeswoman before becoming spokewoman for the Governor's Office (she is being replaced by Ally Isom and is planning to work for Love Communication).

Steve Gehrke, former Trib reporter (brother of Robert, who still works at the Trib), who is the now the public information officer for Corrections.

(thanks to Jesse Fruhwirth for helping with that list)

So why do top journalists migrate to the political field, away from this noble endeavor of making the world a better place by investigating and reporting the truth? Some tell us they feel called to serve and believe they can make a difference. Others will say they had no choice because journalism jobs are drying up (though, in truth, they are being reinvented on the digital side).

Then there is the $$$. It is hard to ignore the government compensation packages. There used to be a perception that working for the government was a last resort because the private sector paid so handsomely. Spokespeople, however, seem to be immune to bad pay. According to Utah's Right to Know Website, at least four of the above spokespersons earn more than $100,000 with one earning $156,000. Few journalists earn salaries in that range, which is why we are so easily picked off when lucrative spots are dangled in front of us.

But the loss, dear reader, is yours. Pyrah's now-defunct Sausage Grinder blog was a lively, intelligent read offering a well-informed journalist's point of view on legislative and news affairs. Holly Mullen for years offered critical commentary on the Utah Legislature; she will now be working hard to make lawmakers look good. News consumers will have to rely on the vanishing breed of political reporters at our dailies (oops, the D-News mostly decimated its political reporting crew) as well as the stalwarts at City Weekly, a handful of broadcast reporters and the more opinion-heavy bloggers.

For those reporters sticking it out, it creates some heavy lifting to be sure, especially when we're up against former colleagues who know the tricks of the trade and can use them against us. They're known to say things like: "I would have never run with a story like that when I was a journalist. I was a professional." Or, "We don't like the way you attempted to get your information, so we're going to punish you and refuse to speak to you anymore."

So, while I'd like to congratulate today's two new spokeswomen, in the long run, their appointments won't, as they say, make my day. They're just two new gatekeepers who will soon have pages of media "messages" to share with us and be highly motivated to do everything possible to keep us from getting the unvarnished truth.