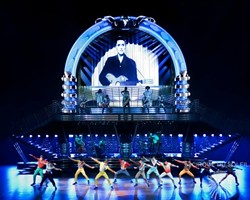 In Las Vegas last week to ring in the New Year, I took the opportunity to attend Viva ELVIS!, the Cirque du Soleil tribute to The King at the new ARIA Resort & Casino. I was not disappointed. --- A disclaimer: I am an unrepentant, true blue Elvis fan. I grew up going to Elvis movies with my mom and we saw him live in concert when I was a kid, in 1974. I bought the tickets for my mother's birthday; they were $10 each (I still have the stubs). So, the chance to see Viva ELVIS! was a no-brainer. But, not without some trepidation. I have great admiration for Elvis Presley and was afraid that the Cirque du Soleil show might not do The King justice, might not treat him with respect. How silly of me for ever doubting the great Cirque. If you only ever get to see one show in Vegas, this is the one. Viva ELVIS’ music arrangers sampled 914 albums and 33 feature-length films, concert recordings, interviews and home movies to extract more than 17,765 samples of Elvis’ singing and speaking voice for the show. It's stunning.

The smallish theater -- there are really no bad seats -- fills up with girls in bobby socks and hoop skirts before the show, dancing and giggling throughout the audience. They're plants, of course, squeaking and screaming about Elvis -- getting all hot and bothered -- playfully jumping onto the back of seats and whipping up the crowd's anticipation. Then, the curtain literally drops revealing an eye-popping set, and the Cirque du Soleil cast and fabulous live band launch into a  raucous version of Blue Suede Shoes, followed by Don't Be Cruel and then a very touching version of One Night With You, sung by a female vocalist (most of the show is Elvis' own singing). It's a different spin on the song, a fantasy about Elvis bonding with his twin brother Jesse Garon, who died at birth. A gigantic guitar is suspended in the cosmos, as Jesse and Elvis acrobatically maneuver around the guitar, hung in space. It's a very moving piece, and just one of many in Viva ELVIS! that really get at the humanity of Elvis Presley. 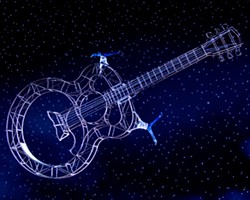 I'll be honest: When I was told Viva ELVIS! was a 90 minute show without intermissions, I thought it would drag. But, the show flew by with near-perfect pacing. Saved is a hand-clapping revival tune which combines acrobatics and dancing with one of Elvis' favorite gospel songs. And, speaking of acrobats, one of the highlights of the show was Got a Lot of Livin' To Do, where cast members in superhero costumes (Marvel comic books were an Elvis favorite) bounce to impossible heights on ginormous trampolines, defying gravity and thrilling the audience. Incidentally, a few of the Cirque cast members, including the performer who plays Col. Tom Parker, are from the SLC area. 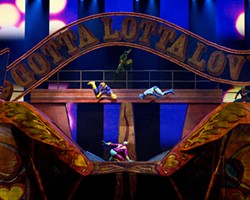 The hits keep coming -- Jailhouse Rock, Heartbreak Hotel, Love Me Tender, Return To Sender, Are You Lonesome Tonight and many more. Throughout the show I was very pleased with the music selections, which weren't entirely expected or obvious: King Creole, Bossa Nova, Don't, and It's Now or Never, for example. Some of the more bombastic music Elvis was known for, didn't make the cut -- there's no American Trilogy, for example -- and I was happy to see attention paid to some of The King's lesser-known discography. 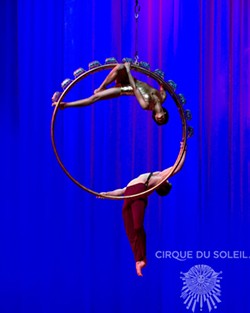 There is a forced moment or two, however. A Western scene, supposedly a nod to the NBC '68 Comeback Special, seems no more than an excuse to show off some fancy lasso work by rope-savvy Cirque members. And, without Elvis himself to bring the curtain down, it seems like Cirque du Soleil couldn't quite decide how to wind up the show. There's a riveting version of Suspicious Minds - sounding like U2 meets Elvis -- at the end of the show. And apparently, that originally was the finale. But the song ends on a suspended chord and doesn't quite sound finished - a weird way to wrap things up. So, in more recent performances Cirque tacked on Hound Dog at the very end, with the entire cast providing a dynamic, powerful finale that works much better.

Like Cirque du Soleil's Beatles tribute LOVE, Viva ELVIS  is a risky proposition: How to capture a larger-than-life icon like Elvis on a Vegas stage, without the man himself. But, Cirque pulls it off. I left the theater feeling warm and fuzzy - like they'd honored the spirit, the music and the life of Elvis Presley, having fun with the kitschy side of The King, but also unveiling deeper aspects of the man -- and, always with the eye-popping visuals that Cirque du Soleil is deservedly renown for. I said it before: If you only see one show in Las Vegas, make it Viva ELVIS!