When it comes to 2D and 3D art, there are many who dabble in both but find strength in one without focus in the other. Working on what seems to be two very different forms that while based out of the same creative structure produce very different results. Not many are able to find a balance to create both at an equal level. So picture how awesome of a treat is it to find an artist who can master both without much effort. 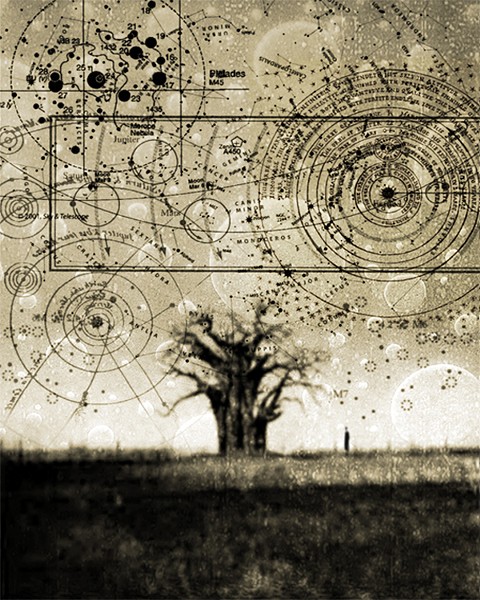 --- One of the residing artists over at Poor Yorick Studios, Dave Laub has been showcasing his skills for storytelling within his sci-fi related works for years around the Utah art scene. But his dayjob places him in a very different role as a graphic designer for localized video game company Smart Bomb Interactive, working on several titles such as “Sky Legends” and “Snoopy: Flying Ace”. You can currently check out some of his work on the 4th floor of the Main Library over the next month. I got a chance to chat with Dave about his works both in 2D and 3D, plus thoughts on local art and a few other topics.

Gavin: Hey Dave! First off, tell us a little bit about yourself.

Dave: Well, at night I put together odd images and stories and during the day I work for a local video game company… Just like a crime fighter.

Gavin: What first got you interested in art and design, and what were some of your early inspirations?

Dave: My parents, comic books, old sci-fi movies, the art of Salvador Dali and the voices in my head.

Gavin: Did you seek out any college for the art or were you more self-taught?

Dave: I did, I had a taste of USU, SLCC, the U, Alcohol and the fine grains of IKEA furniture. But of all the incredible instructors that had an impact on me, the one that influenced me the most was Paul Davis.

Gavin: What was it that drew you more toward digital art than any traditional form?

Dave: A good friend from school got a start in the gaming industry early on and started up his own art house. He hired me on full time and immediately I was baptized as a pixel monkey. I’ve loved it ever since, plus the hat they give you is really cool. But I have to admit I truly do miss pushing pigment around a canvas for hours and being covered in art fungus. Mmmm, lead.

Gavin: What's the process like for you when creating a piece, from concept to final product?

Dave: I would like to think it looks like some over the top sci-fi film where my eyes are glowing with creativity and lighting strikes are all around me, with lots of weird machines, tuning lots of dials and throwing levers and crazy smoke effects…but in reality, I’m just a giant moody schmuck hunched over a small sketchbook doodling silly ideas while shiftily looking over my shoulders. Staying up late slouched in a chair, staring into a hypnotic flickering picture box (with lots of dials); trying to put those silly sketches and ideas together into a semi-cohesive image… it would be way cooler if I had smoke effects. 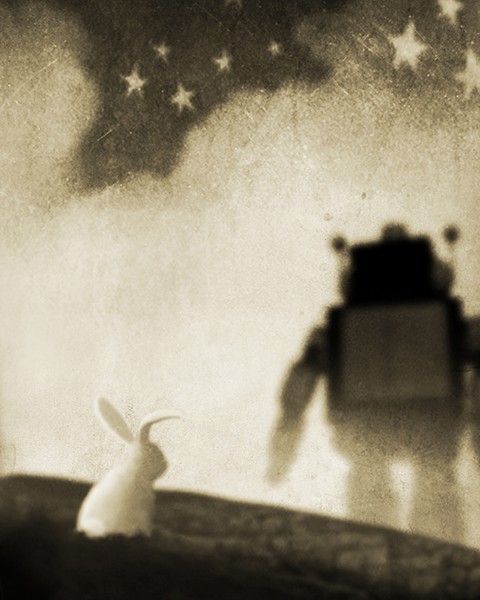 Gavin: Is there a lot touch up and constant changing for you since you have that kind of freedom with your work, or do you have an idea of what you're aiming for and stick with it?

Dave: I do try and stick with an original idea as much as I can, but that doesn’t always work. That’s what so nice about the medium. It allows me to make changes and explore on the fly without messing up the original image. OHHH PRAISE! Technology!

Gavin: I read a while back that you tend to use OCD as part of your work. Can you elaborate a bit more into how that plays a role in your creativity?

Dave: Umm, Hmm… Note to self – I don’t know what the hell he’s talking about. I think he might be messing with you. What? Oh Gawd! I think you’re still in Hell. Calm down. Slowly count to seven and just nod and smile.

Gavin: ...Fair enough. What made you decide to move into Poor Yorick Studios, and how has it been for you having a studio there?

Dave: I had wanted to pursue my own work for a while. A friend who has a studio there thought I should come down and check it out. I was introduced to Mr. Brad Slaugh and I’ve been there ever since. It’s definitely been a good thing for me, I’ve been able to show and sell my work and meet some incredibly talented people.

Gavin: How did the opportunity come about to work for Smart Bomb Interactive?

Dave: I was fortune enough to work for the owners at a previous company, so when they started Smart Bomb Interactive they gave me the opportunity to come aboard, and a brand new plus-five pickaxe.

Gavin: What are the similarities for you between the 3D art you do for gaming and the pieces you create as an artist?

Dave: The process is much the same. Starts with a bizarre idea, a lot of concept sketches, start production… freak out, make a lot of changes. “Stay the course” as our producer likes to say. Nail biting, pep talks and lots of sleepless nights. Then, walla!!

Gavin: You've worked on a number of games through them, specifically on “Snoopy: Flying Ace”. How is it for you seeing a product go from design to a finished game?

Dave: For me it’s like a roller coaster. As you approach it you can smell popcorn and cotton candy and you’re like, “Oh man, this is going to be cool.” A little closer you hear the click clack and the screams of people, but you just shrug it off cause, “This is going to be awesome!” Then you’re locked in and committed and from out of nowhere you swear you catch the whiff of urine or vomit mixed with that metallic smell… and BAM! The ride begins. Incredible highs, insane lows with neck breaking corners and loop-d-loops, oh Gawd! Why so many loops?! OH NO! Tears start welling up in people’s eye’s. Mine anyway! And you start praying, “When will this thing stop? Please make it stop!” Then it’s over and you walk to the exit all dizzy with bile bubbling and wobbly legs. You hit fresh air and you’re ready to do it again. It is a unique experience with a lot of talented people involved; truly a collaborative effort. 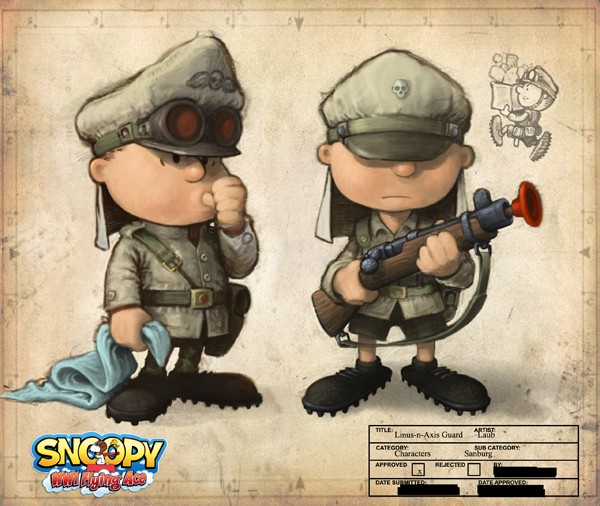 Gavin: Without giving away major details, can you tell us some of the stuff you're working now?

Dave: All I can say is check out the Smart Bomb Interactive web site.

Gavin: You've had your works shown beyond traditional galleries like at PMT, and currently have a display over at the Main Library. What's the public response been like from those exhibitions?

Dave: Over all I think it’s been positive, but I still look out the window at night expecting to see the town folk all riled up with torches and clubs. 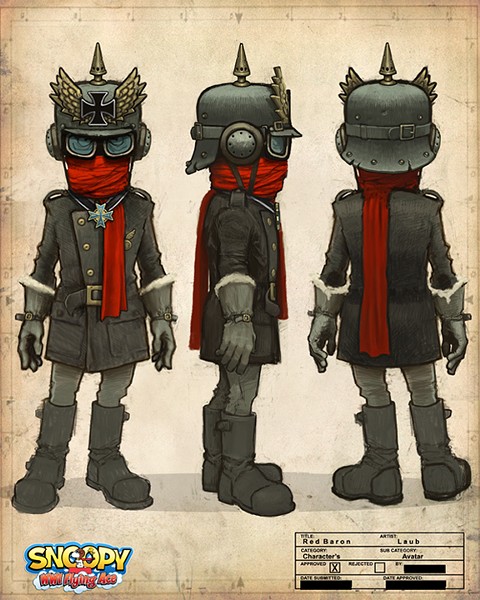 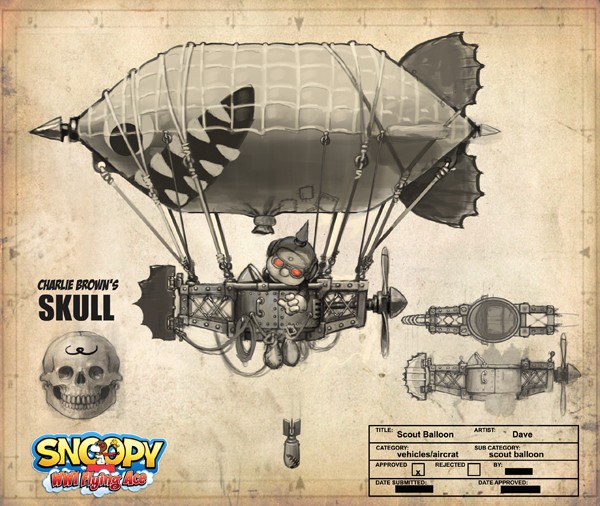 Gavin: Going local for a bit, what are your thoughts on our art scene, both good and bad?

Dave: The good: incredible talent, a strong and supportive community, a potential for true growth. The bad: we could always use more local support!

Dave: I don’t know, maybe we should all go on a pilgrimage together. Seriously, I really don’t know.

Gavin: What's your take on Gallery Stroll as a whole and how its doing today?

Dave: I’ve always enjoyed Gallery Stroll, although I’m not much on social events, I think it’s important to remember all effort that goes into making it happen and what it’s all about.

Gavin: What can we expect from you throughout the rest of the year?

Dave: I do have some shows coming up in the New Year, with hopes of new work. I’ll definitely continue to try and pad my Astronaut Candidate application and I’ve been thinking of entering the Don Ho Mai Thai Machete Classic. Winner takes home $500 bucks, people.

Dave: Its rare when I blog, but my blog, Poor Yorick Studios, and to Andy the Andean Condor, who will turn 52 on January 22nd.