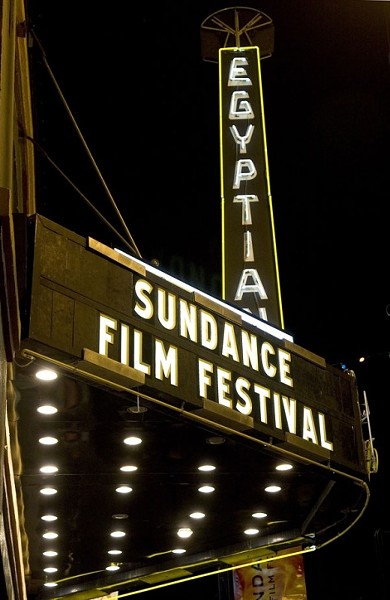 Robert Kirby has all the luck.---

According to his latest column, the Trib humorist has a photo from the 2000 Sundance Film Festival proving he met not only RuPaul, and not only Tammy Faye Baker, but both at the same time! If my blog entry contains an unusually high number of errors, it's because I’m typing through hot tears of envy.

The combination of RuPaul and Tammy Faye is so potently gay that it's to Kirby's great credit he is fearless enough to display the photo above his desk -- I'm thinking it must make him the hippest heterosexual male LDS former-cop writer ever. (Now, if only he would scan & post it online! It sounds like a hoot.)

But who could blame me for being jealous? Local press passes to the Sundance Film Festival are scarce as hen's teeth, and the only year I managed to score one was in 1997. I had visions of partying late into the night with Parker Posey (who would recognize in me a kindred spirit, and we would become fast friends and embark upon many adventures together).

What really happened was that she brushed against my long black wool coat, which I had draped over a banquet chair while I scribbled quotes from the award ceremony into a notebook. She swept past in triumph (having just accepted a Special Jury Award for The House of Yes), and flashed me a brilliant smile, which made me drop my pen.

I'm easily star-struck. I never washed that coat again. (In the spirit of full disclosure, I must admit that later it succumbed to a particularly bad moth infestation. I hasten to add that this had something to do with a fair-trade African rug purchased from a disreputable dealer, and was not in any way Posey's fault. But, damn, I miss that coat!)

Still, the experience was far from having my photo taken with RuPaul and Tammy Faye. Hell, at that point, I would have been satisfied with Sheree Rose and Jim J. Bullock.

My press pass that year got me into one party: An industry party sponsored by IFC. So, great, I found myself schmoozing with a bunch of media people, all jockeying for status and position -- and I was the low man on the totem pole.

"I'm with Twitch, an A&E supplement to the University of Utah's student paper The Daily Utah Chronicle."

"Oh, how interesting for you. Good bye!"

It was deadly. Not only was there no chance to meet Parker Posey -- who no doubt had better parties to attend that night -- but I was being dissed by a bunch of ego-driven media professionals.

The most famous person there was Roger Ebert -- and he saved the night for me.

Ebert was stationed on a balcony, where all the cool people were queuing up to shake his hand. Having nothing better to do, I joined the line, feeling like a nobody, expecting the same rebuff I had experienced all evening.

As it turned out, Ebert's a really nice guy. I don't remember exactly what we talked about -- even in the presence of a well-known film critic, I was in shock -- but he talked to me for about five minutes, which was more time than the guy from HBO got. He seemed genuinely interested in my tales of the Chrony, and offered some encouraging, fatherly advice for the budding journalist.

Ebert's kindness and generosity -- and not his fame -- was what made this the most thrilling Sundance celebrity encounter imaginable.

I didn't even regret much that I forgot to get a photo.