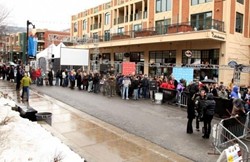 St. Vincent performed solo, her lightning-white frame buzzing. A master of contorting pedals and effects over sweeping melodies, she began with “Actor Out of Work,” which she said hopefully wasn’t the case for the audience. As she tuned her guitar, she punched a button and a shaker’s percussion along with a series of vocalized “Bum, bum, bum”s carried her into “Jesus Saves, I Spend.”

Her refreshingly weird variety of industrial orchestration dominated on “Save Me From What I Want,” while the reverb slowly crept into the Brian Eno cover, “Some of Them Are Old.” St. Vincent ended her short, powerful set with “Just the Same But Brand New,” a song inspired by an interior designer friend in Manhattan, who’s eccentric client wanted her new chic decor, but the exact same. However, the song isn’t about interior design.

The soulful siblings from Muscle Shoals, Ala., Secret Sisters, came all dolled up in country dresses and deep makeup. Their awe-inspiring harmonies carry forth their renditions of classic songs of the ‘50s—what they’re most known for. They played songs like Patsy Cline’s “Leavin’ on My Mind,” George Jones’ “Why Baby?” and the Rufus Wainwright rendition of “Do You Love an Apple?” The bumpkinny darlings also played two originals and ended the set with some gospel music, because they are “women of faith ... and proud of it.”


The Cafe was running over time so singer-songwriter Matt Nathanson played a quick succession of songs. But the set was dominated, in time and impressiveness, with his non-exhaustive barrage of charming banter. In the middle of one song, that he admitted was a rip-off of “Jesse’s Girl” he broke into a sing-a-long of that song with everyone shouting the chorus loudly. He ended the set with his most famous number, “Come On Get Higher” and the pleased crowd filtered out, as Nathanson encouraged, “to watch some fucking documentaries.”