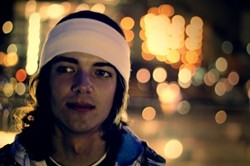 Three local releases to talk about today from some a couple different places, not exactly what we'd be able to call a normal week. --- Starting off with an EP release from Dangeroos, a two-man project by Aaron Alex and Erich Tyler. I don't have a lot to write here about this, haven't seen them perform live, all I really know is its two redheads playing rock. They got an EP out now, download only, called Rnnn' Rdhds. You can get it at their Bandcamp website. No album art for this one, so here's a court sketch of the two. 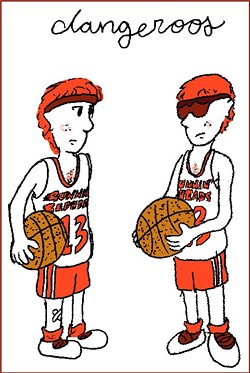 Then tonight we have two releases, the first from our friends in Bobo Shand. ...Its time to be blunt, I can't fin

d shit about their EP, just the title Swings. For the record I've tried to do an interview with this group, TWICE, and both times they flaked out. So I”m not shocked to see little to nothing mentioned by the band themselves about their own release. Its not like they're asshole, they're actually pretty cool guys, they just don't do anything to help themselves. Whether that's by design or they're just lazy, you can make the call on that. In any case, they're playing Kilby Court tonight with The Blackhounds, Larusso, Mason Jones & The Get Togethers and The Direction. $6 starting at 7PM. That is, if they don't flake out and not show up. Here's a picture of them in absence of album art, if they don't show up you can hold it up and pretend they played.

Meanwhile over at The Complex you can check out the release from DJ Scott Free. I know, you're probably looking at this and thinking "a DJ with an album release?" But yes, its true, there are DJ's who do original music and don't just bombard you with samples like you're at a Jazz game while they're losing. And after hearing a few tracks from it this week, I can honestly say Who I Am is probably one of the best we've seen in a few years. Actually, it's probably been two years since we've seen a DJ release like this. An album of this kind of rarity much be purchased. You can catch him in the Vertigo room along with

Steez and Brian Blurr. All we know is its 21 and over, don't have a time or ticket price, thanks a bunch SmithsTix! 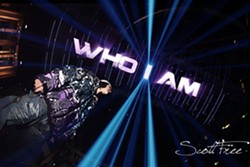