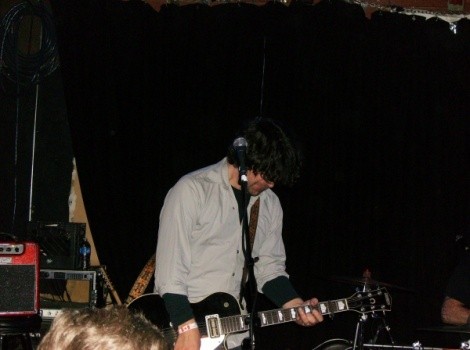 Even the most hardcore of Sebadoh fans knows that the volatility of Lou Barlow can make any show an adventure. Thankfully, Valentine's Day brought out Barlow's charming and funny side for a fine show Monday night at The Urban Lounge.---

From the get-go Monday, Barlow was in fine comic form. The show was slated as a celebration of the band's mid-'90s albums Bakesale and Harmacy, and newly remastered and beefed-up versions of those albums were supposed to be in stores by now. But, Barlow related, the re-releases were bungled, "so we're touring in support of our latest t-shirt."

With that, Sebadoh was off and running on a show that WAS heavy on Bakesale and Harmacy tunes, but also delved back as far as the band's first cassette-only release, Weed Forestin', and included several tunes from Bubble and ScrapeSmash Your Head on the Punk Rock. and

Barlow opened with "On Fire" and followed with "Dreams" ("This is a song about dreams. It's called 'Dreams'") and "Too Pure" before long-time partner in Sebadoh Jason Lowenstein (now of Fiery Furnaces) took over lead vocals for five songs, including "Sister," "Mind Reader" and "Got It."

Lowenstein's goofy charm always offered a nice counterpoint to the acerbic Barlow in the past, but Barlow himself was obviously having a pretty good time Monday, cracking jokes about Utah beer and his own sad-sack persona.

The middle of the show was the best portion, with the band concisely tearing through a slew of its best songs of the mid-'90s, including "Magnet's Coil," "Skull," "Rebound," "Ocean" and "License to Confuse."

At that point, the band had delivered 15 songs or so and could have started the game of leaving the stage, coming back for encores, then leaving again. Instead, they forged on, delivering exactly the 30 songs that Barlow said they'd rehearsed for this tour. With Lowenstein's Fiery Furnaces bandmate Bob D'Amico on drums, the trio had no problem whipping out a few more delights.

The latter half of the show ranged away from Bakesale and Harmacy to include old faves like "Sixteen," "Brand New Love," and "Forced Love." When they finally DID leave the stage, and heard the P.A. start playing music, Sebadoh insisted on coming back and playing encores: "Not Too Amused" from Bakesale and "Willing to Wait" from Harmacy.

Barlow couldn't resist one last jokey barb in introducing that finale: "We get a lot of requests for this song. We're going to play it anyway."

Given that it was the 30th song of the night, I had no complaints. It's hard to imagine a more raucous good time for a Valentine's Day gig.

Opening act Quasi helped set the mood with a jaunty set that veered from straightforward indie-rock into odd prog and jazz excursions when singer Sam Coomes moved from guitar to keyboard. Drummer/co-vocalist Janet Weiss was her typical powerhouse self, utterly impressing with her ability to sing while bashing her kit. Among my faves from their set: "Bye Bye Blackbird" and "Laissez les Bon Temps Rouler."