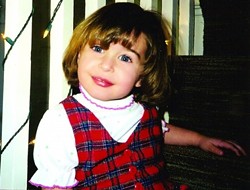 When Todd Bluff contacted me in November 2010, he said, basically, 'my ex-wife and best friend are in prison in Utah for murdering my daughter.' They are victims, he said, of false convictions and a justice system that failed them--and no one wants to hear about it.---

It's not particularly unusual for convicts to claim they are innocent--although it's less common than you might think--but secondary victims of the deceased are not usually the ones leading the innocence investigation project.

I was intrigued, but not sold on whether I wanted to investigate this. Bluff sent me a huge packet of information, however, and in reading old news articles about the case it became quite clear that the prosecution's case--the one a jury heard before convicting the pair--involved what seemed to me to be not impossible but improbable.

That is, the prosecutors argue based on forensic pathologist testimony that Rebecca Bluff's injuries were caused by blunt-force trauma and that those bruises were so extensive Rebecca died of internal bleeding caused by the many bruises. The prosecutors blamed Andrew Fedorowicz and Ferosa Bluff for inflicting those alleged traumas. The part that seemed improbable to me is that Rebecca had no broken bones or fractures, only one 1-centimeter cut on the back of her head but no others on her bruised body, and the autopsy barely mentions swelling of any of the alleged blunt-force traumas. So the prosecutor's theory involves a child who was beaten so badly in the days leading up to her death that the bruises caused fatal internal blood loss, but not a single one of those blows was just a bit too hard and broke her 4-year-old bones or skin?

Lastly, I learned quite quickly that there was no defense medical expert whose testimony I could review to get two opposing perspectives on Rebecca's death and it's potential causes. All three medical experts who testified in the 1999 trial testified for the prosecution. Not all cases have a defense medical expert, but it was a glaring omission in this case which, as I report, was almost entirely based on medical evidence and lead to potential life sentences for Andrew Fedorowicz and Suzannah Bluff.

But if that seems strange--as it did to me--the case only gets stranger, involving bondage sex toys, a sex tape, allegations of cult-like behavior. To read more about that, check out today's story.

Click play below to to listen to part one of Andrew Fedorowiczes' October 2010 parole hearing.


Click play below to listen to part 2 of Andrew Fedorowiczes' parole hearing.

Next, here's an uplifting profile of Ferosa Bluff and the women's exercise program she created at the Utah State Prison, a story done by KSL's Carol Mikita, who manages to not mention what Ferosa Bluff is in prison for.

The Rebecca Bluff death Re-Examination--Arguments of the Case