If for only one evening, stepping into the Union Ballroom at the University of Utah is like stepping back in time and on to another continent. The Vienna Ball is Salt Lake Symphony's annual fundraiser and this year it went off glamorously.---

Under the baton of Robert Baldwin, the symphony (pictured above) played an exquisite three sets of waltz-laden numbers for the happy concert-goers' bliss. But first, as tradition goes, members of the symphony played alphorns (pictured below) as an introduction. After a speech by emcee Kurt Bestor, in another tradition, the entire crowd paraded around the dance floor for the Grand Waltz.

The BYU Ballroom Dance Team (pictured below) demonstrated some flashy footwork, ranging in style from Vienna Waltz to swing numbers by the night's end, to inspire and entertain the audience.

Propelled by the symphony's lovely sounds, the crowd took the floor to try their hand at the dances, with varying degrees of success; others watched from the sidelines. The symphony showed that the waltz is not stuck in the 19th century, by performing pleasant surprises in%uFFFDJohn Lennon’s “Norwegian Wood” and Rogers and Hammerstein’s “Carousel Waltz.”

The Mark Chaney Jazz Trio (pictured below) helped give the symphony a respite, however they didn't take it easy on the crowd and kicked up the pace with some swing and tango numbers. 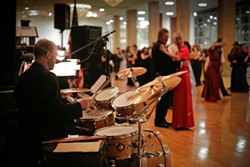 This is a charity event to support the volunteer-driven orchestra, so bidders stuck it out for a plethora of items in the silent auction.

As the hour approached midnight, the audience slowly packed up and headed home, surely marking their calendars for next year's Vienna Ball, which is not to be missed.