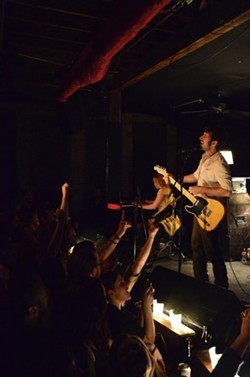 The rowdy audience at Bar Deluxe had no problem raising their glasses of cheap beer and cheaper whiskey to the roots rock marathon of The Builders and the Butchers and Murder by Death Friday night.---

Going down, fire, hell, whiskey, lost love, copious drinking—these are the major themes in opening act The Builders and the Butchers’ song catalogue. The dark, foreboding lyrics add a musky flavor to melodies that are a hard dose of straight-up Americana that pleasantly burns a little in the back of your throat like a good whiskey. Hard-strummed acoustic guitar, banjo and two drummers (at times) make an infectious sound as hard to squirm away from as Hades’ subtle grasp. 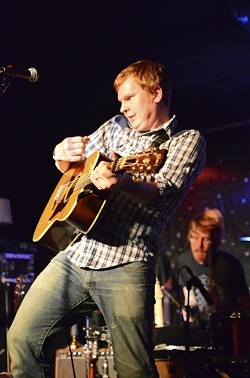 After opening with (what I think was) “In the Branches,” lead singer Ryan Sollee commented that Utah has “the prettiest girls and the craziest mother fuckers in the country.” Thus, he painted, at least, the concert’s demographic to a tee. “Rotten to the Core” ended on a sweet breakdown that showed the band’s musical capabilities beyond tight songs, then the crowd responded to “Devil Town” by throwing the first and only crowd surfer into the sky. The 45-minute set never faltered in pace or energy and the band converted a few followers to their domain. They will be back on April 24 to headline a gig at the Urban Lounge.


A red velveteen curtain was dropped in front of the stage during set change. As the curtain raised, the excitement escalated to a frenzy and four-piece Murder by Death (pictured at top_ took the reins to play tunes pulled from their eight years of song-craft. The left-handed, smooth-voiced Adam Turla lead the gut-bucket barrage of tunes tinged with Southern rock, gothic and Western, but if cellist Sarah Balliet didn’t steal the show, she stole many a man’s heart.

The set started off with several numbers from their excellent 2010 release Good Morning, Magpie, including “Kentucky Bourbon,” “As Long as There is Whiskey in the World,” “You Don’t Miss Twice (When You’re Shavin’ with a Knife)” and “On the Dark Streets Below,” which was aided by a trumpet player. While the band’s themes are similar to The Builders and The Butchers, they show more chutzpah and diversity between their songs. After the sampling of new numbers, Turla said that was “enough of the new shit, it’s time for some old ones for you guys.” Of the hour and a half of music, the set highlights included “Ball & Chain,” “Comin’ Home” and “Steal Away,” among others that are illegibly written in my notebook due to PBR- and whiskey-induced penmanship. These cheap drinks pair oh-so-nicely with the band; looking at the stacks of tallboys on every available flat surface, I wasn’t the only one who thought so.

At the set’s end, Turla said that his “twin cousin’s band Mustache” would be performing three songs as an encore to the encore. The “twin” was in fact Turla—albeit shirtless and sporting a red bandana—who preceded to sing songs about snakes, a mythological hawk and other things that “will scare you shitless.” Wielding a guitar that looked like flames and backed by a drummer, the set was a ridiculous, comical break to end the evening and showed that Turla is an “artist” and, more importantly, doesn’t take himself too seriously.