Saturday, Feb. 19: In the second bout of Wasatch Roller Derby’s 2011 season, the SLC league took on Pueblo, CO’s Devil Dollz—right next door to a tattoo convention and a block away from a monster truck rally. Who says SLC has no culture? ---

The last time the Pueblo Derby Devil Dollz traveled to Utah in 2009, they destroyed Ogden’s O-Town Derby Dames in a brutal 320-25 blowout. PDDD’s all-star Jailhouse Jawbreakers had a far tougher time against WRD’s Midnight Terror at the Salt Palace Saturday night, falling behind from the first jam and never making up the ground.

[Side Rant: As a roller-derby spectator for six years and a bout DJ (for the Salt City Derby Girls) for five, maybe I pay too much attention to the background music at games. However! Lightweight, mid-tempo pop isn’t appropriate for any sport, except maybe extreme knitting or senior curling. Punk, rock, metal, electro, industrial, techno, whatever—anything less than 140 beats per minute and it might as well be all-skate time at the roller rink. It’s science(ish): Music slows down, game slows down. And, under no circumstances, should you ever hear an acoustic Mr. Big ballad at a roller-derby bout. No. Circumstances. If this inexplicably does happen (as it did Saturday), your DJ should be taken out back and given a Boogie Nights beatdown with skates. End Side Rant.]

From the first whistle, WRD’s Midnight Terror controlled the bout with speed and smarts; Pueblo’s only response was brute physicality that kept them in the penalty box for most of the time. WRD jammer Skull Candi established herself as the bout’s MVP almost immediately, racking up the majority of points for the night, leaving PDDD and her own team’s jammers in the dust. Only the Jawbreakers’ Britney Shearz seemed seemed to have any jam mojo; the rest of the Pueblo jammers, as astutely summed up by [sideline party to remain unnamed because roller derby is all about politeness now, apparently], had “shit for brains.”

The smackdown continued in the second half, though Pueblo rallied a time or two to slightly close the point gap—maybe they’d finally sussed out WRD’s strategies, maybe WRD was holding back a little. Still a massacre, however; the O-Town Derby Dames in attendance must have been loving it. The Midnight Terror’s Honey Delunatic was taken out with an injury midway through the second half, and Skatey Gaga got in a handful of impressive jams—but, other than that, it remained the Skull Candi Show till the end, much to the Jawbreakers’ misery. 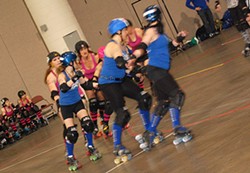