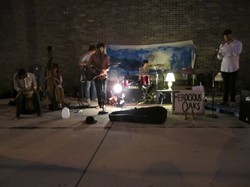 As we close out the month of February we have three new local releases from five-piece acts to check out with shows happening this weekend. --- First up is an EP from the brand new group Luminaire. There's a bit of sour news to report with this band, The Continentals seem to have broken up (or at least gone into hiatus from performing), so out of that decision keyboardist William Alleman started up this brand new ensemble to continue making music. Shades of his prior band shine through, but on a more astral level than the soft-rock counterpart. You can currently download their new EP 2010 off their Bandcamp page for just $2, or you can check them out live for hard copies tonight. They'll be playing The Trevortex in Draper (994 New Hope Drive) along with another Continentals spin-off called Body Glow, and they're opening the floor to any other performers who wish to join them. And as a bonus... free hot chocolate and cookies! Show starts at 7PM, no word on door charge, take $5 just in case.

Next up on the list was a last minute addition from The Suicycles! Those of you who have been keeping track know that Camden Chamberlain officially declared during the CWMAs that Cavedoll is no more, which means aside from maybe a final performance to put it in the grave, there will be no further reincarnations of the group. In the wake of that decision was born The Suicycles, who have become a multi-entertaining project with their own music, videos, radio show and more. But primarily its an electronica rock band, though I'm sure Camden will argue with me over that description. Literally voting on it this week the band decided to publish a five-track EP with promise of a full-length in the works, and thus the release 4 Psychotic Car Rides. If this album (with stunning artwork from Sri Whipple) is any indication of what's on the way, its pretty safe to say the coming album could be the breakout title of 2011. Only time will tell. For now you can go check them out live tonight down in Provo at ABG's, playing along side Broken Spells and King Niko.

And while we're in Provo, tomorrow night will see another EP release, this one from Ferocious Oaks. Defining themselves as a “street folk” band, the group (seen above) have been frequent performers around Utah County, but haven't really come into their own yet. Which is kind of a shame, not just for the fact that they write some really pretty songs, but for the fact that they're the only band bold enough to take a harp on stage. And I don't mean a mouth-harp, I mean an actual harp! For the past few months they've been laboring on their first EP titled Polyamory, slowly waiting for Gary Sevison to put his final touch on it. From what little I've been able to hear, its definitely worth buying a copy to at least check out their sound. You can catch their release show at Velour tomorrow along with Emily Brown, Boots To The Moon and Mudbison. Just $5 starting at 8PM.