Hello to all you cold wind hating, terrible lake smelling, orange sky glowing, temperature fluxuating, let's rush to the hills and ski before returning to the mess below enthusiasts. Far be it for me to do the commentary work of KSL's highly paid weather team, who reported on their website that it was 122 degrees on Tuesday for three hours, but I think mother nature has decided to push the Utah Weather-Changing Clock up to every five minutes. While I was typing this blog entry up the snow was coming down at a fairly decent rate, and now the sun is out while it continues to snow. ...Let's get the fuck off weather chat and check out the latest update to the 337 Memorial Wall.

--- Before we dive into events, let's talk music. Specifically with UtahFM who have apparently launched a smartphone app! Usually I usually don't give grief to UtahFM too much since they're understaffed as it is, but you'd think someone could have made an announcement somewhere, right? No offense to those in charge, but you need a new website and someone frequently running the social networks for updates. The stream is pretty decent with only a fifteen second delay between high and low quality with little signal loss. Its a pretty cool way for us to now have community radio (more to the point, local music) at out fingertips. I highly encourage any business currently using a phone or tablet to play music in their store to download it! Now if only KRCL had an app. 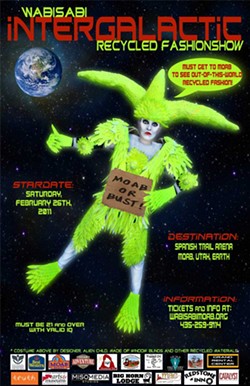 Speaking of local music it finally happened this week, after a nearly year and a half absense from X96, Corey O'Brein launched a show, of sorts, focused on local music. Every Thursday night at 9PM he'll be hosting a short program called Listen Local First where a band will come in and be featured for an interview and some music. Before we go on, let's get the criticism I have out of the way... its a ten minute segment once a week! We had nearly 200 Utah-based albums released last year, of which I have a list of. Enough to start your own radio station with, most fitting the X96 alternative format-- and this is the most amount of time Simmons Media and station management will allow any of that on the air?! What a pathetic joke. On the flipside of this... one more local band on the air is more than they had last week, which was Neon Trees once almost every hour. So at least its an effort that with any luck will grow to take over the hour. The debut show this week had CWMA winners King Niko, which you can listen to the full episode as a YouTube clip over here. If you're a band who wants to get on the show, email your best song to local@x96.com or drop it off at their main offices in Trolley Corners c/o Corey O'Brein. (And Corey, we're not mad you stole our cover, at least I'm not, I can't speak for all in general.)

Switching to localized changes, for those of you unaware, Salt Lake Citizen has changed ownership! Due to some hardships and difficulties running the shop on her own, Lindsay Frendt sold the shop in January to Craft Sabbath co-founder Meghann Griggs with Tony Jacobson (formerly of Disorderly House) brought on board as operations manager. The Arty winning location looks to be under changes as the storefront has been concealed from the public, leaving many to wonder what the two have in store, literally. When reached for comment Jacobson said “Salt Lake has its own distinct style and doesn’t need to be just a regurgitation of what you see in other cities. We’re proud to promote a new level of dexterity that this town hasn’t seen before.” There will be a soft opening on Tuesday March 1st with an official grand opening set for April 2nd from 3-6PM. We'll chat more about that in weeks to come, but for now any vendors looking to add their stuff to the store's selection can reach them by email at 801citizen@gmail.com.

Going into events, if you happen to be in or around Moab today you can check out the WabiSabi Intergalactic Recycled Fashion Show. Yeah, a bit of a mouthful, but a pretty interesting event. Designers and artists create new fashions out of random materials to be auctioned off as a fundraiser for some of Moab's non-profit organizations. Every year there's an array of extreme and delusional designs that sometimes got for hundreds of dollars. But its all for some good causes. If you dare rush down, the show starts at 6:30PM tonight.

Moving onto sports, the second half of The SLUG Games will kick off at Brighton next Saturday with "Construction To Destruction". Not a lot has been posted about the event other than the course has almost been completed, so essentially the entire event at this point is a mystery. They're still taking competitors as of this posting though, so head on over to the website and sign up!

Meanwhile if belly dancing is your thing, loom no further than the Utah State Fair park as next week they'll be holding the tenth annual Belly Dance Spring Fest. As you can clearly see by the poster below there will be tons of booth and activities for people to join in and enjoy, not to mention we're pretty sure there will be a constant performance stage happening somewhere. And its just $7, go check it out. 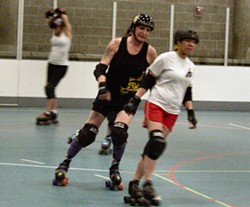 Next up on March 11th we'll see the Utah Arts Alliance starting up a new event they hope to carry out every month. They're calling it Connect. The idea of it being that local artists from all genres and forms come together for a sort of meet-and-greet and show off some of their work for the rest to see. And best yet, free to the public. Those artists looking to come and show off their art, click over to their website for details and contact info.

Finally on the list we're going to open up the blog a bit and post an open letter about the Salt City Derby Girls. A few months ago I posted a Saturday blog entry containing an outsiders analysis of the inner-issues that had boiled over into public forum from SCDG. Surprisingly what I thought would garner much hate mail and tons of grief... got praise from every side involved. But recently I received a letter from a Fresh Meat skater out of SCDG questioning the write up as well as other blogs about roller derby in the state. Since it wasn't a hate filled rant laced in sarcasm over readership, I mailed back and had an interesting conversation of the state of local roller derby and why I chose to write it up. The derby girl requested that an open letter be posted about her experience with SCDG this year, and since no one has ever asked to do this before I figured... why the hell not? Its not like this blog has ever had a set format beyond interviews. I'm not sure of this will stir up a bunch of shit from someone, but I don't care, that's what the comments sections is for and we might as well use it. Enjoy.

I am an avid sports fan and love going to watch sporting events whenever I can. I became interested in roller derby near the end of the 2009 season when a friend gave me free tickets to go watch a bout at the Salt Palace. Since that time I have attended bouts for not only the Salt City Derby Girls but have attended bouts by several of the other leagues around the Wasatch Front as well. I simply fell in love with roller derby. After looking into what different leagues had to offer and generally learning the rules of flat track roller derby I decided that Salt City Derby Girls had everything that I wanted in a league. They had more teams, a defined try out period and numerous fun activities outside of the arena. In 2010 I started attending everything that Salt City Derby Girls had to offer, not only bouts, but other events and even private scrimmages and learning how to be a NSO (non skating official). During this time I started to get to know several of the skaters and made many new friends. By May of 2010 I had decided to join the Salt City Derby Girls so I bought a pair of skates and started skating on my own. I skated as much as I could to get re-acquainted with roller skating because it had been so long and prepare myself for tryouts. I found that the ladies of Salt City Derby Girls are among the most friendly and helpful group of people that I have ever been associated with. They really gave me the confidence to continue to skate and attend tryouts, so in November I went for it and tried out.

I passed tryouts and officially became a member of the “Fresh Meat” group of the league, knowing that I was still a long way from having the ability to skate in a real bout, so I worked really hard at practice and also skated on my own to improve. What impressed me the most about Salt City Derby Girls is that they have the most stringent fresh meat program of any roller derby league that I have seen. On top of that, I was always welcomed and quickly became a part of a wonderful group of ladies. Shortly after the Fresh Meat program began I noticed negative posts on Facebook from a few Ex-Salt City Derby Girls, a couple of which were among my new friends. This seemed to cause quite an uproar among the Facebook crowd, which seemed to be coming from people outside of the Salt City Derby Girls and was based on assumptions. What expressly stuck out to me the most was that Salt City Derby Girls didn’t seem to be responding to the negativity and the hype. Practices continued on as usual, everyone was still very friendly and it didn’t seem to be affecting my experience within the league. What it came down to, was that there were definitely a lot of people that were affected by what happened, both inside and outside of the league, but certainly nothing within the Salt City Derby Girls organization was affected beyond having to make a few personnel changes. Practices continued, scrimmages went on as scheduled and everyone was preparing for the 2011 season. I saw no hint of any internal league meltdown. Well, I have passed “Fresh Meat” and am now ready to select a team to play for. Everyone, me included is very excited for the upcoming season and I am truly a part of THE most professional league in the state of Utah. I am proud to be a part of my league – The SALT CITY DERBY GIRLS!

As for the blog... over the next few weeks we'll chat about an art event for a worthy cause, a pair of awesome old-school print designers, delve into a crafting blog, peer into an underground dance company, look at the works of a film designer and artist, and chat with a homegrown comedian in NYC. Or at least that's what we're hoping will happen, weather and ambition provided. As always, we'll see what happens.