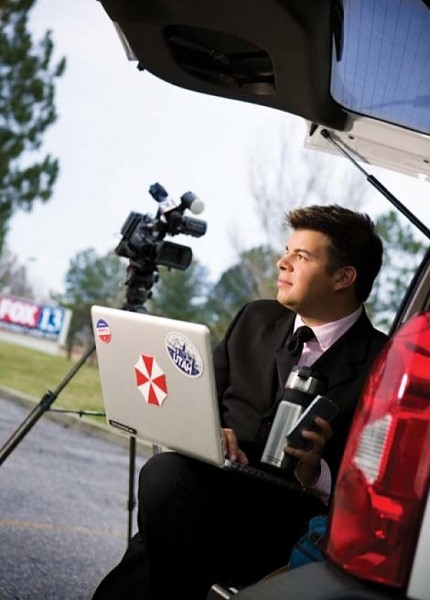 "This trial is cursed for me," says Utah's Best "do everything reporter," Ben Winslow from Fox13. First, yesterday, a tire on the station's news van was slashed. Today, his cell phone disappeared and was found in the possession of one of the jurors in the Tim DeChristopher trial.---

If you're familiar with Winslow's prolific tweeting, you won't be surprised that he tweeted about both incidents.

Yesterday, the news van was parked directly in front of the Frank E. Moss Federal Court House on Main Street when its tire was slashed. There are no suspects despite several police officers stationed outside the court all day; although the large gathering of activists supporting Tim DeChristopher in that area may have shielded from view any crime. There were no citations issued yesterday against any of the demonstrators and no other reports of crimes that I'm aware of (I last checked in with an ACLU legal observer around 4:30 p.m. yesterday).

Maybe there was a little confusion or lack of awareness of the distinction between FoxNews--of Bill O'Reilly fame and infamy--as opposed to the local Fox affiliate, which has only loose connections to the cable news network.

Today, Winslow went to the court security officers at the federal court house to check out his phone--inane court rules dictate that no phones or recording devices may be taken into the court house by reporters or the public (although lawyers get to take their cell phones inside). Officers couldn't find the phone. Other reporters started calling Winslow's phone, hoping to activate the ring or at least a vibrate, but nothing. Eventually, a call from Salt Lake Tribune's Aaron Falk was answered. The juror on the other end, Winslow says, was a bit salty. "You know it's a federal offense to talk to a juror," Winslow reports the man saying to him. "But you have my phone" was apparently the reply the juror received.

It's all been straightened out now. It was news to me that apparently jurors also can take cell phones into the court house. The more I hear about this rule the more it seems everyone except for the general public and news reporters may bring in their phones. In a building that's supposed to be the paragon of fairness, this rule is an ugly bruise.

Winslow was awarded the "Best do-everything reporter" by the staff of City Weekly in 2010.