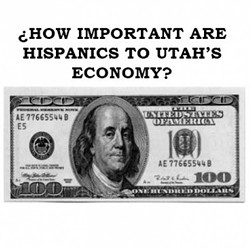 You shoulda' stocked up on toilet paper yesterday. In an effort to prove the economic importance of immigrants--and their supporters--activists are asking those concerned about Utah immigration policy to buy nothing, from anyone--for the next two weeks.---

The ("this is not a boycott, this is only an economic action," organizers say [blogger's note: I'm confused]). Ahem, let me start again.

This economic action was approved by a gathering of community members March 8 at the Centro Civico Mexicano. Immigrant rights activists' have complained about Utah lawmakers' insistence on legislating matters related to immigration even though state efforts are--at best--a hackneyed imposition on regulations that only the feds can improve in a beneficial way. Notably, this year, Utah lawmakers created a state-based guest-worker program that the ACLU of Utah, among others, says is unconstitutional. On top of being legally questionable, critics complain the "guest" worker program will provide employers with cheap, exploitable labor while not providing the workers with one bit of protection from federal immigration authorities. Another bill may encourage more racial profiling among law enforcement--as if there wasn't enough of that already.

So, if you're outraged, try joining this collective action. Really. Just try.

The first two directions provided by the campaign supporters are no easy task:

Two weeks? Boycott everything, and every business? Should I boycott immigrant-owned restaurants and other businesses? Oh wait, it's not a boycott. D'oh!

3. Campaign and develop a "good image of the immigrant."
4. Boost the campaign to promote "Hispanic-Latino vote."

Well, OK, then. The last two are a little easier, but numbers one and two are not as effective as they could be (I could say much worse, but won't).

First of all, it's a boycott. Just own it.

Second, as you may recall (I think Dan Savage is still trying to forget), the author of nationally syndicated sex column Savage Love and editor of Seattle's alternative-weekly newspaper The Stranger called for a boycott of Utah--in advance of Sundance Film Festival season, no less--after the Church of Jesus Christ of Latter-day Saints and many Mormons from across the world helped pass California's Proposition 8 in 2008. In one of his more memorable and persuasive Private Eye columns, City Weekly founder John Saltas told Savage to shove it.

A Utah boycott hurts the very people Savage claims to speak for. A great deal of tourist dollars spent here go to the club, restaurant or the entertainment industries—each of which provides ownership and gainful employment for a large number of gays and lesbians. Those persons shop with and support gay merchants and business people. Combined, they all choose to live in Utah where they stand and speak up for their causes in the heart of conservative—if not hypocritical—America.

This immigration boycott is a little different, but Saltas's message about being targeted remains true. Boycotting everything does not particularly punish the individuals responsible for Utah lawmakers' totally asinine insistence on "fixing" things they can't fix and--if it does anything at all--will also punish allies.

Anyhoo, the immigrant and Latino/Hispanic community itself is divided about whether the boycott call was the right move. Old-school activists like Archie Archuleta called it an "experiment" and Tony Yapias said it was inappropriate because business groups like the Chamber of Commerce were on the "right" side of the debate this year.

All this boycott stuff was to call attention to a letter written by Utah economists--some who, ironically, represent the business community being boycotted--who wrote that immigrants are a vital part of Utah's and the U.S. economy. The letter is below. If you're not boycotting City Weekly--hey, WE'RE FREE!--then read below.