Layton’s Davis Conference Center wasn’t quite at capacity Saturday night as JCRD home teams Hilltop Aces and Railway Banditas faced off for the first time in 2011, but the women have obviously spent the off-season training hard to play harder no matter who’s there. After a moment of silence for local roller-derby superfan Wild Bill Hill (who passed away in Florida last week), the blue-clad Aces quickly put 2 on the board. The Banditas in black answered back immediately with a triple Hot Trick for 15. The lead flipped back-and-forth until Banditas jammers Tic Tac Flo, Clam Jammer and Killa Patra found their scoring grooves, keeping their team on top from the remainder of the first period.

For the first half of Saturday’s bout, the majority of the Hilltop Aces’ jamming had fallen on an increasingly frustrated Penny Slain; in the second, Malibu Harpy and longtime JCRD hotshot Zelda Cruz turned in several impressive jams (including a screaming 15-point run) that nearly closed the gap. But, the Railway Banditas’ strong jammer trifecta, as well as several defensive gaffes by the Aces—including the game ejection of Slayer Cake, who’d proudly piled on the penalties—kept the bout in the black until the end. 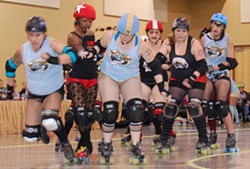