Utahns, others occupy U.S. Dept. of Interior in energy protest

Utahn Deb Henry reports from Washington D.C. that as many as 75 activists, including several Utahns, are currently occupying the U.S. Department of the Interior demanding a cleaner energy system.---

Power Shift 2011, a youth summit of some 10,000 youth environmental activists, took place over the weekend, culminating in a march this morning. After the march, some activists traveled to the Department of the Interior, the federal bureaucracy charged with protecting and utilizing millions of acres of land across the country that are publicly owned.

"There's probably 300 people outside standing in solidarity, singing, telling their personal stories," Henry says. "They're here from Wyoming, the Gulf Coast, international people are here, activists from all over."

Henry reports Jake Hanson (pictured), Krista Bowers (pictured below) and three other Utahns are amongst the 75 individuals inside who are likely awaiting arrest.

"We've probably been [at the Dept. of Interior] for about an hour now. They've locked everybody inside now, I'm assuming waiting to arrest them. They were given three warnings before the locked the doors up," says Henry, who was in the building initially but left because "I can't get arrested again. ... It's so hard not to be inside. I'm so proud of them."

Henry and Steve Liptay, of Salt Lake City, were among nine activists who were arrested Friday for singing in the U.S. House of Representatives Chamber.

Tim DeChristopher, cofounder of Salt Lake City-based Peaceful Uprising, delivered a keynote address at the summit an encouraged massive civil disobedience in the face of environmental destruction (former vice president Al Gore also delivered a keynote address). A graduate of the University of Utah, DeChristopher currently awaits sentencing in U.S. District Court for disrupting a federal oil and gas lease auction. You can watch his speech below. Here is an excerpt:

With these people just right here, without recruiting another person, we could send 30 people to a mountain-top removal site, shut it down temporarily, cost them a lot of money, [and] start to clog up the court systems of West Virginia. We could send 30 people the day after that, and the day after that, and the day after that, every day for a year. And I don't think we would ever get to that year point because mountain-top removal would end before that. Long before we got to that year, Barack Obama would be forced into a choice of ending the war against Appalachia or bringing in federal troops to continue it.

For all my disgust and disappointment with Barack Obama, I don't think he would bring in federal troops to protect a mountain-top removal site. I think he would end it before it got to that point and it's our job as a movement to force him into that position until we give him that choice. 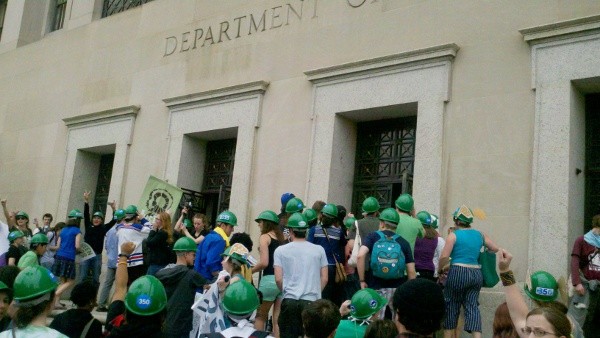 Henry says she has heard criticism that her action Friday disrespected the democratic process, but she stands by it. "Dissent is the highest form of patriotism and ensuring people fulfill their campaign promises is important to me. ... Everybody keeps blaming Obama [for a failure to install stiff environmental protections and a shift away from fossil fuels] but it's because we're not standing behind Obama and demanding he follow through."

Peaceful Uprising was founded by Utahns at Power Shift 2009 and now also has a chapter in West Virginia, DeChristopher's home state.