Hello to all you water boiling, paint dipping, egg hiding, basket stuffing, jellybean flicking, chocolate bunny eating, Peep devouring, fake grass shredding, Easter enthusiasts. I would really like to believe that there are no families who have tomorrow planned around going to church, doing an egg hunt, and then going to see the film “Hop” to cap it off. ...But I know there are. Honestly, pick one, maybe two at best (preferably the first two) and don't turn it into an extravaganza. It's a holiday with an entirely different meaning behind it that we colorcoat with a false one, isn't that good enough? The 337 Memorial Wall hasn't been updated yet, probably due to the weather being a pain in the ass, so here's some random wall art from around the city.

--- Before we delve into a few things, I feel like addressing something involving

In This Week. There are far greater details here but I'm gonna trim this down to a single paragraph because I don't feel like boring you. There was a party they held this past Thursday for everyone who was ever featured in their “Scene In SLC” column over at The Garage, a party I've been to the past two years and enjoyed. This year, as I expected, for several small reasons, I wasn't invited. No biggie. ...Then throughout the week I discovered several others were also “uninvited” to this event, and the only ones who received the invitations were people who were in “good standing” with their publication. Whatever that means. For me, I could care less, it wasn't my party and let's be honest, its just another night for people to get drunk and network. But I take umbrage to this because many of those who were uninvited are pillars of our entertainment community. People who bust their ass frequently for little to no cash to bring you a good time and often get zero thanks in return. For the staff of In to signify that a portion of those people don't matter to them anymore... that's insulting. I can't say for certain if the In staff particularity care about what I think, but I find this to be a catty bullshit move on their part and kinda disappointing that excluding certain personalities was more important to them than upholding the original standard they set for that column and the celebration to follow. I'm not pissed or looking for an excuse to let the vitriol fly, I am just disheartened.

Moving into events, The Free Speech Zone will be throwing Graffiti Fest today from 4-8PM. The long and short of this event is that they will be art on display as well as new works created on the spot by some of SLC's finest and freshest, along with DJ Phantom spinning and scratching the hits throughout the day. Every year this event is a blast, if you have any appreciation for the artform you should get up there this afternoon.

If that's not quite your thing, later tonight is the rescheduled Tall Bike Joust for April! For those of you who may not know, this event consists of climbing on some tall bikes and jousting on them. Kind of like the old video game “Joust”, but with bikes instead of ostriches. The event set for two weeks ago was rained out but this one is happening tonight starting at 9PM. Meet the group at the north side of Liberty Park where they'll bike to the location of the event. Be warned, falling off these bikes will hurt... a helmet is more than suggested. 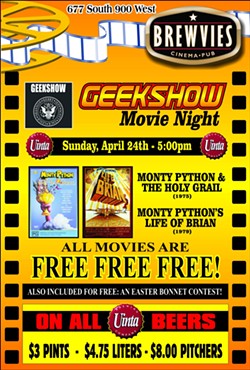 Then tomorrow over at Brewvies Cinema Pub will see an all-day Geek Show Podcast event. Starting roughly around 1PM the panel will be in full force in the main hall recording three shows in front of a live audience, and for all we know there will be audience participation involved on the dreaded third episode. And then for something completely different, starting at 5PM will be the double feature Movie Night, celebrating Easter in the most religious way a geek could... watching Monty Python. And remember, all this is FREE!

Moving onto next Saturday we'll see the 20

th Earth Jam SLC take over Liberty Park for two days straight. Forty performers have been booked along with a slew of other activities including a children's garden, belly dancing, dozens of vendors, a third acoustical stage where people can sign up to perform, and you knew it was coming... the traditional drum circle on Sunday afternoon. As of the day this is posted, they're still taking applications for all types of vendors and probably will continue to do so until mid-week. If you're interested, check out their website for details. Earth Jam is usually a good show to check out, and we can only hope this year's weather plays along. Oh and tie-dye, lots of tie-dye.

Later that evening over at Area 51 they'll be throwing a very special edition of Fetish Night. The theme of the evening will be Cosplay, which if you're not familiar with that, I'd suggest looking up full details online, maybe find a video or two. But the quick explanation without the visual tutorial is dressing up like sexy anime, comic book and video game characters. Nothing like seeing a sexy Princess Peach hoping you'll rescue her. So why am I promoting this particular event? Rather than having all the money go to the bar, the evening will be a fundraiser for tsunami relief in Japan. Not to mention having vendors and demos on hand and various other surprises. Think of it this way, you get to welcome the month of May in sexy styles while helping out a good cause. ...And perhaps you'll hook up with a tiger/warrior princess who has a fondness for fishnet. 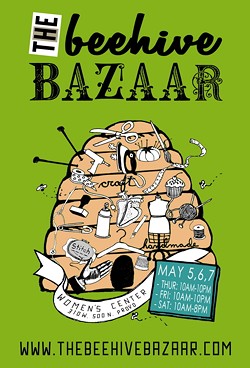 Continuing on down the rest of that week we'll see the next Beehive Bazaar, Utah County's biggest crafting event. This time the bi-annual three day event will take over the Women's Center in downtown Provo, bringing back a lot of familiar names to local crafters and craftees, along with some fresh faces hoping to impress the crowd. The last time this event happened there were vendors who literally had nothing left to sell by the end of it all, some even making new material on the spot and taking advanced orders to meet the demand. If you're into crafts then trust me, go early on Thursday and see what they've got on hand. You can check out their website for a full list of those attending.

And while we're in Provo, let's talk about the Rooftop Concert Series. This is an idea that I wish someone would have tried in SLC, but even I have to admit that this probably wouldn't work well in our downtown area with the traffic and buildings. Running along side Provo's version of Gallery Stroll, the first Friday of every month there will be a free concert on top of the parking terrace at 100 North and 100 West, not only entertaining the crowd above but allowing music to fall to the streets and patrons below. Their website already has a full schedule up and we'll be doing some reminders here every month, like this one here for May 6th featuring Rolling Stone cover runners Fictionist and 2011 CWMA performers Paul Jacobsen & The Madison Arm. Even if you don't live in Provo I suggest checking this out, it's a really great idea that I'd love to see continue.

As for the blog... we'll check out a couple of the last theatre productions for the 10-11 season, chat up a Utah County photographer, visit with a local comedian, look into some new local comic books and their creator, and hit up a local snow and skate shop. Plus some info coming the first week of May for you comic book fans. At least that's the plan for now, as always, we'll see what happens.