While our local comedy scene may be on the rise at the bigger clubs, there's an entirely different trend happening around the city that fans should appreciate. An underground movement of comedians are making their presence known by performing shows on the cheap at smaller venues away from the overhyped traveling acts. Refusing to play the game of vying for an opening spot to little pay, these comedians grouped together to give you your money's worth and a quarter of the cost. We're gonna chat with one of those comedians today.

--- Aja Sicks has become a featured name in local comedic circles for her acid tongue and quick whit on the mic, shining on stage with her story telling skills and refusing to hold back her opinion. She's become a highlight for many impromptu performances and underground shows, opened for local bands and gained a loyal following among SLC's finest stand-ups. I got a chance to chat with Aja about her influences and career so far, plus her thoughts on the local comedy circuit.

Gavin: Hey Aja! First thing, tell us a bit about yourself.

Gavin: ...Fair enough. You look so lifelike. What first got you interested in stand-up comedy, and who were some of your favorite comedians growing up?

Aja: Observation is something I've always done in a very critical manner throughout all of the anomalies and abstractions of life. Alongside observation, I've always held very strong opinions about the things that I've seen or encountered. Comedy is to me, like all art, a medium in which to express personal philosophy and experience. Inspiration is everywhere. Stand-up comedy is just a very brutal public expulsion of all of the demons brewing around in ones mind and I have many. I enjoy exploitation, degradation, poking fun, and all manner of criticism. Without a doubt, the most resilient bear in comedy is Fozzie Bear, my favorite comedian growing up. His legend is evident in the timeless phrase he coined, that every comedian works so very hard to hear "Wakka Wakka." My favorite comedian currently is Sarah Palin's retarded kid. he's so silly. ROLF!%uFFFD

Aja: I "officially" got thrown into it. I've always told people my stories. My natural knack for thoughtless decision making in my life has led to many amazing and almost unbelievable stories. I am a robot. I am programmed to tell the truth. In truth, comes brutality and embarrassment. I've felt it to be somewhat a calling in my life to share my most embarrassing and degrading stories about myself, not just to make people laugh, but because I believe that my thoughts and experiences cannot possibly be too removed from the human experience and its nice to make others feel like they are not alone. I've written jokes in my head for years and always assumed I'd one day take it to the stage, but always made an excuse as to why I wasn't ready yet. I ran my material by people here and there, and one day it all just started happening, people wanted to hear more. I agreed to do a joke on the radio and was soon after asked to perform on stage. I am extremely lucky to be requested and so well received and am currently waiting for the rapture.

Aja: Like all things in my life it truly started with luck and ended in hard work. I have to thank one of my favorite comics, Levi Rounds, for this. I've attended his shows for years and inevitably end up chatting his ear off at the end of every show about how I'm going to do comedy someday. I literally just got a phone call one day letting me know I was performing my first set in two days. Nervous as hell but ultimately ecstatic, I agreed and spent the next 48 hours trying to figure out what was funny. Since then, I've had so much support from local comics and friends its been amazing!

Aja: I've learned that I will always be learning. There are too many variables from show to show, to ever predict how it will go. Sometimes you've got a sodomy crowd, sometimes you don't.

Gavin: What's it like for you personally coming up with material and decided what works and doesn't?

Aja: When I'm coming up with it, I have no idea if it will work at all. I never really know until I put it out there. Until then, its funny to me, but who cares?

Aja: So far I've been ridiculously fortunate. I have been so well received, complimented and supported by other local comics. It is not a competition. For awhile I thought everything I wrote was complete garbage because it wasn't the same style or format as my favorite comics, but was quick to realize that I can only write what I know. The format and delivery that comes naturally to me. It is not about trying to be like anyone else and especially not about being better. Its art, it is subjective. Who is better, Edgar Degas or Henri Matisse? It is not a competition.

Gavin: You've become one of the more underground comics in Utah, earning your stripes and audience but not really in the spotlight. What do you think of the status you have and the following you've made for yourself without help from the major clubs?

Aja: I don't know that I have earned the status I feel like I have received. I have been fortunate. Opportunities are presented and I accept. I am just trying to work hard so I can maintain whatever "status" I may have. 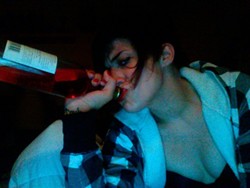 Gavin: Are there any plans down the road for you to tour or are you sticking to Utah for now?

Aja: I have plans for a band, that was initially just me and a karaoke machine singing doo-wop, but its turned into more of a freestyle hip-hop thing now. Tell me what you think about this: "I like egg salad, so it seems, my tastebuds linger between the extremes. Imma bland-o-phile, gotta prob'm w'dat? eff u b, I'll eat yo cat" ...It's still a little rough.

Gavin:%uFFFDWe'll throw down a beat later and see how it goes. Going local, what's your take on the stand-up scene, both good and bad?

Aja: I think it would be better if more comics did freestyle rap, locally and abroad. No, nevermind, that's my thing. just kidding. Don't print that.

Aja: Levi Rounds, Cody Eden, and the most hilarious man I know, Rob Roake of The Suicycles.

Gavin: What are your thoughts on the clubs that provide stand-ups a forum to perform, and the work they do to help bring in audiences?

Aja: I take it upon myself to promote my shows. While it would be beneficial to have clubs promote more than they do, ultimately, I think promoting ones self is more effective.

Gavin: Whats your opinion of national stand-ups coming through town and what that does for the local scene?

Aja: It's great. When a national act comes through town, regardless of who it is or if I like them, it gets people to go out to a show. Reminding people that there is comedy happening in this city and hopefully prompting them to support local talent as well.

Aja: Things to go to... Friday, May 6th at 9PM over at Mo's Grill, I will be opening for Levi Rounds. Things to hear... we're doing a lot of local comedy on a podcast now on iTunes, "Waiting For The Rapture With The Suicycles”. Things to read... most of my geek'd out freestyles are on my Twitter, follow it! Plus my YouTube channel.