Saturday, April 30: Ogden’s Marshall White Center was packed (not too difficult; the rec center only holds 100 or so around the track) with derby fans eager to see their hometown rollergirls face off against each other for the first time this season. ---

While much-improved over previous seasons, the O-Town Derby Dames are still no match for the continually-impressive Junction City Roller Dolls, who dominated the bout from the first whistle—within 10 minutes, JCRD’s all-star Trainwrecks were already up 40 points on OTDD’s 25th Street Brawlers. Most of those were scored by Trainwrecks jammers Wee Smasha, Killa Patra and Zelda Cruz (who’s never above a little showboating when she’s in the zone), while Brawlers jammers No Name Dame and Josie Cansockahoe scrapped hard for every point they could get.

Things didn’t go any better for O-Town in the second half, as Junction City piled on more points and the game-stopping injuries escalated: JCRD’s Hanna Bull had already gone down hard in the first half; OTDD’s Pepper Diamond and JCRD’s Demon Darlin’ in the second. Beyond that, the bout wasn’t exactly heading toward a nail-biting conclusion. 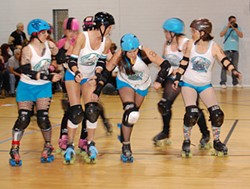 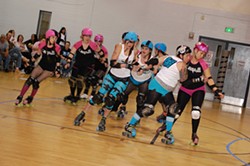 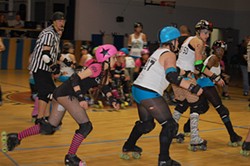 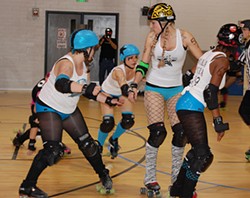