If the bombardment of news promos last Thursday over your primetime programming didn't clue you in, it's officially May Sweeps for the big four stations we have in town. --- And while everyone is busy alerting you to the scary shit they should have alerted you to when it happened (instead of now when they can charge advertisers triple), there's at least one station who's been playing hardball behind the camera since late February.

KSL News has reportedly been raiding KUTV's talent pool with nothing more than the promise of a slightly bigger paycheck and the equivalent of a “promotion” from the title those individual employees currently have. After losing to 2News's team for two ratings periods in a row, Deseret Management Corporation (the for-profit arm of the LDS Church) apparently gave the go-ahead for Bonneville to start shopping for replacements out of KUTV's stable, in an effort to revitalize their organization and become more competitive. Once again, bowing to the old television standard set in place since the '50s: “Need new ideas? Steal your competition's.” As of this post it can be confirmed that they've currently taken KUTV's former operations manager, and at least three other employees from lower crew positions previously overseen by that manager. However, on the flipside of this coin, if you're an employee from KUTV... that's not exactly a bad move to make. Ever since CBS Corp. sold the former O&O station to Cerberus Capital Management (who in turn created a sub-division called Four Points Media, only to make a deal with Nexstar to run it and eventually purchase it) the station has undergone several rounds of layoffs over a three year period along with frequent insurance changes and paycuts, not to mention the outright refusal to offer yearly raises or formal promotions. Forcing many employees to take lower wages while doing three times the work. So in retrospect, if you started as say... a news editor, and over the past three years you've been forced to also become a promotional editor/production crew member/master control operator to fill for laid off people, AND you haven't received a raise since 2007... Chances are you'd take a $1 raise to become a “Lead Editor” too.

After this post you probably won't hear much about this (or receive flat-out denial) until 2012, because at the moment KSL is only fishing for behind-the-scenes people. You know, the ones who work their asses off and aren't even given credit in the show for the work they do. That's because most of the on-air talent we have in SLC (those who would normally garner this kind of attention for trading stations) are tied to contracts that include non-compete clauses, which will keep them off local air for a period of time once they expire, as opposed to hourly employees who could change jobs in a 24 hour period without hassle. As of right now via KUTV email chatter, it appears KSL has approached at least two editors, two engineers, two production crew members, two producers, a control room operator, a show director, a traffic coordinator and (the coup de grace that no one can officially confirm yet by name) at least two on-air talent with contracts due to expire within the year. 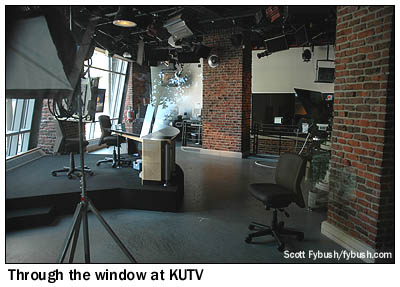 So what does this all

really mean for local news? ...Who the hell knows. No one can officially say whether employing a certain group of people will make a difference, any more than they could say if they didn't hire them and kept the course it would all come full circle. But if you go back and ask any station's staff at the time about any single campaign or brand change or spending spree, all done in the name of ratings; they'll all come back and tell you that no one singular event or person caused a turnaround and changed everything. And KSL's management team are not stupid, they know this, they're all experienced individuals who have gone through this same kind of process at other news stations. So why go to such great lengths to buy up a bunch of people in the hopes that it will make a difference by November? Well... you gotta remember... they're all looking at a smaller picture.