Through my lens: Endur | Buzz Blog

Through my lens: Endur 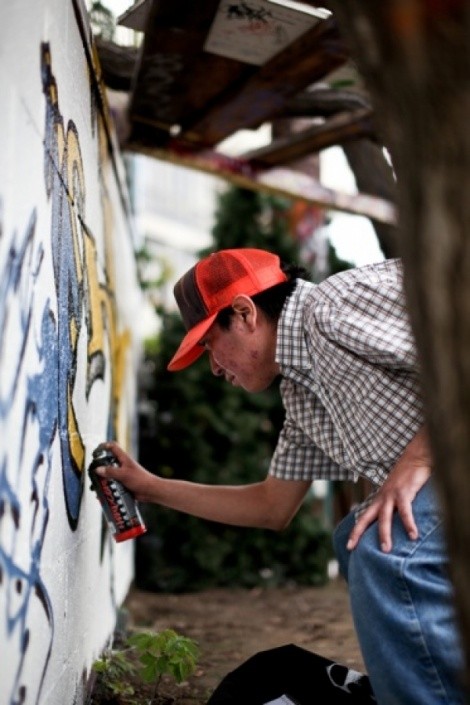 One week ago, the Free Speech Zone hosted its annual Graffiti Fest, an opportunity for local street artists to display their craft and engage with the public.--- Hearing about the Free Speech Zone as a place for artists to come paint sounded exciting. Yet, I wondered if the increasingly bright light on street art actually served the medium or not.

With the ever rising popularity of Banksy and Shepard Fairey, street artists are finding ways to present their work in more widely accepted ways. As Ché Guevara shirts were once prolific in wear, it seems like Obey Giant t-shirts are readily available to fill the void.

These images, repeated as frequently as Warhol's Campbell's Soup Cans, are steadily present in many hipster's quiver of accessories.

Victims of their own success? Perhaps.

So with this narrative clearly framed in my mind, I approached one of Salt Lake's more legendary street artists, Endur. I asked if graffiti was losing its subversive edge, if it was becoming too mainstream to say anything.

Endur said no and then changed the conversation altogether, giving me a response that I had never considered, subversive in its own right and challenging me to see another view.

"The first graffiti artists here in Utah were the Anasazi," he said. "Sitting Bull said that this land could never be owned in the first place. Why do you build fences for? Why do you build this for when it was given to us as a gift of the great spirit?"

Drawing on his American Indian heritage, Endur said that graffiti can always be subversive, especially when it comments on and in spaces that other people think they can control.

So while I was worrying about the frequency and fashion of certain images on t-shirts, he was more concerned with how owned spaces actually control visual expression in our communities. He also pointed out that we jump to protect monuments of public art like Nine Mile Canyon, but then disavow the very act that allowed those works to exist in the first place.

So, it seems that graffiti made me think in a new way, and it turns out that my initial question still got answered. To Endur, that's the whole point. To me, street art is still alive.