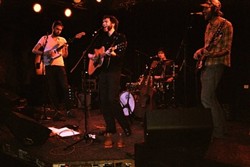 We've got three local releases to talk about today, including one with a show that's already sold out it's attendance. --- First, let's discuss one that came out last month with no fanfare behind it. The Brocks, named after the two leading brothers Dan & Grant Brock, have been having a pretty good run in Utah County as a mid-card band, pushing out their indie pop/rock sound as a prelude to some of the area's heavy hitters, but they haven't really struck out on their own as a headlining act yet. Hopefully that's going to change with the release of their Winter '11 EP, six quick songs showing off the band's range and talent for harmonies. I'd personally rather hear more that isn't so much focused on holding down a single note on the keys for ten seconds at a time in the back, but that's just my opinion. You can download the album off iTunes now, or find the group at their next live show for a physical copy.

The next one on our list the debut EP from Sandapile. We don't really have a lot on this band, other than they look like they're trying ti emulate the '50s in some way with the clothing and slicked hair, channeling a rockabilly sound (with a taste of grunge according to the ReverbNation website). Aside from a thrown-together Facebook page, the band didn't even have a proper web presence until the start of the week, but what bend ever starts right out of the gate knowing everything, right? These guys actually had a release show last week for their debut EP Mamma Says, but went unnoticed in large part to the location... The Underground. No, not some term we use for stuff not in the spotlight, an actual venue on the rise (7730 South 480 West) who don't have an active calendar. So find the group and grab a copy.

Which brings us to the final album on the list this week is the very much talked about debut from The Poorwills. For those of you who haven't heard the buzz on this one, it's essentially an indie-folk supergroup. Headed by Glade Sowards on guitar who did most of the principal songwriting, Jake Fish from The Devil Whale on bass, and both Wren Kennedy and Joey Pederson for guitar and drums out of Bluebird Radio. Mixing their talent as well as vocal harmonies over the course of a couple months and you get their debut release, Drinks On The Wing. A damn fine effort for a group comprised of four guys with various styles, sometimes a combo like that doesn't mesh, but this album plays off just fine. They've got a release show tonight, but sadly, you won't be able to go. The event is at Slowtrain and tickets went on sale as part of a package deal where you had to pre-order the album to attend. As of last night, the show is sold out. For those of you going you'll also be treated to seeing solo performances from Jay Henderson and David Williams. You can still pre-order the album from Slowtrain until its release on Tueaday.