Saturday, May 21: In a double-header bout at the Davis Conference Center in Layton, Ogden’s Junction City Roller Dolls took on Las Vegas’ Sin City Rollergirls, followed by a home-teams game between JCRD’s Railway Banditas and After Shocks. ---

Sin City’s Janesaw Massacre put her team on the scoreboard first with a 10-point jam, leaving Junction City’s all-star Trainwrecks on the chase for the rest of the bout. Subsequently impressive jams by Sin City’s Geneva Conviction and The Force kept the lead out of reach, no matter how hard the Trainwrecks’ Killa Patra, Zelda Cruz and Wee Smasha skated to close the gap.

With the halftime score at 81-53 in favor of Sin City, both teams’ defensive packs began to alternately fall apart and block up like a week’s diet of cheese pizzas. A round of high-scoring jams by Zelda Cruz and Killa Patra offered a glimmer of hope that JCRD might catch up to SCRG, but to no avail. Final score: Sin City Roller Girls 163, Junction City Roller Dolls 112. 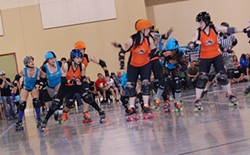 In the second bout of the night’s double-header, JCRD’s Railway Banditas faced off against new home team the After Shocks, who made a splash last month by winning their debut game. Led by captains/scorers Clam Jammer and Wreck N’ Glamour, it initially looked like the After Shocks might repeat—until the Railway Banditas kicked into gear, setting off a back-and-forth bout that was impossible call right up to the end.

The Shocks led 81-57 at halftime, but the Banditas’ four-pronged jamming assault of Killa Patra, Wee Smasha, Dominique Trix and Dawn Key Punch (later joined by a fifth, Stryker Dawn) went aggro in the second half. Combined with the After Shocks’ loss of Wreck N’ Glamour, who went down hard on the track in the third turn and was taken out of the game, the Railway Banditas couldn’t be contained. Final score: Railway Banditas 134, After Shocks 103. 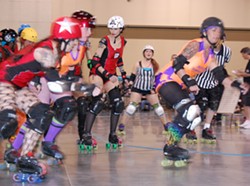 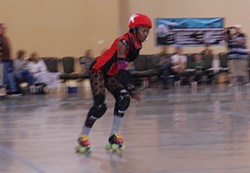