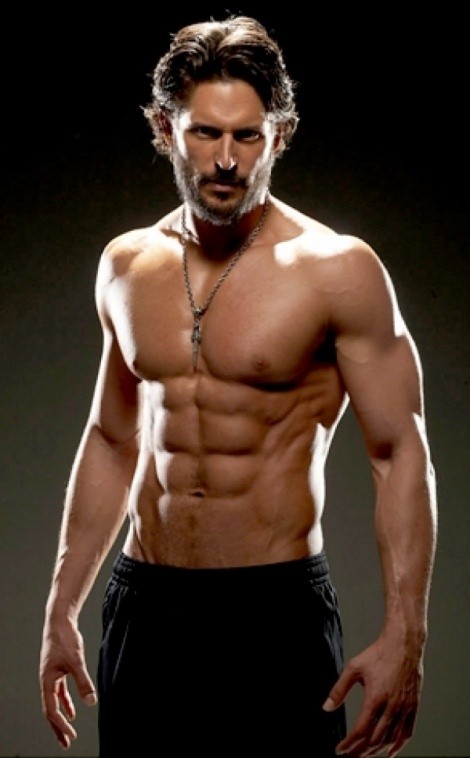 In recent years, vampires have become so overexposed to the sunlight of pop culture that I wasn’t sure at first that I wanted to get back into True Blood. Recently, however, a friend lent me Season 3 on DVD -- and, oh! how glad I am now that I watched it!---

First, a bit of background. (And here I add the obligatory SPOILER ALERT.)

I don’t know very much about the Twilight series, other than it was written by a Utah woman, and includes silly innovations to the vampire myth -- innovations that its readers take at face value, so now we have an entire generation of young adults who believe, e.g., that vampires can “sparkle” or some damned thing like that.

Public interest in vampires seems to wax and wane cyclically. In fact, I think it might be interesting to chart the level of public interest in vampires over time and compare it to other sociological metrics, such as the U.S. Misery Index. (The Misery Index, as conceived during the Johnson administration, attempts to quantify national angst as the simple sum of rates of unemployment and inflation.) It’s not much of a stretch to suppose that the vampire myth reflects psychological fears of powerlessness and social inequity -- and this hypothesis is borne out by the fact that, for instance, the Misery Index spiked in 1980, which roughly correlates with the Anne Rice craze.

I scoff at vampires "sparkling." In fact, I might consider myself a vampire purist if it weren’t for the fact that I myself have accepted many vampire innovations over the years. If I’m not mistaken, Rice originated the idea that vampires shed tears of blood, rather than mortal saltwater -- which made perfect sense to me in the 1980s. And, during the 1970s, I cherished a particular horror comic book that maintained that vampires had the ability to transform themselves into many things: bats (so they could flap themselves out of danger), wolves (because wolves can run fast, and are just really cool), and even a foglike mist (handy for wafting through the keyholes of locked doors).

So, at this late date, I’m not even sure anymore which of vampires’ many capabilities are original or traditional, and which ones have been made up out of whole cloth in recent decades. Would Dracula be able to withstand the full light of the sun after aging a few thousand years? I just don't know. Could humans become addicted to the hallucinogenic blood of Nosferatu? Probably not. Was Sir Francis Varney a sanguine vampire or a psychic vampire? I doubt he even cared.

But, even though I’m reticent to embrace Stephenie Meyer's newfangled sparkleability and many other of the revenants' newfound aptitudes, it is clear that all vampires share a common supernatural gift: the power of acquiring new attributes with each wave of their popularity. And, with this power, they have come a long way since Bram Stoker’s day.

Now, HBO's True Blood is also guilty of vampire innovation. I'm not talking about the advent of artificial blood, which led to the Great Revelation that vampires actually exist, and the subsequent national debate over vampire civil rights. This is a forgivable conceit, central to the series' entire plot.

However, True Blood introduces some irritating changes in terminology. For instance, it may be true that vampires have always had a hypnotic gaze -- if nothing else, the knack seems necessary in order to convince human victims to stand still long enough to get their necks bitten. (Didn't Mina Harker swoon under Dracula's scrutiny?) But “glamour” is the traditional bailiwick of West-European fairies, not East-European bloodsuckers.

Fairy glamour is not exactly the same as vampire hypnosis: Glamour merely transforms the appearance of things into a more attractive shape. (Forget Tinkerbell, and make no mistake: Fairies are every bit as spooky as vampires. But, instead of sucking the life out of you as vampires do, fairies simply steal your children, or bewilder you and trap you in a blissful, timeless dream state from which you may not emerge until all your friends and family have grown old and died.) For instance, a glamoured fairy trove of gold coins proffered in exchange for a human child may, by the dawn’s early light, turn out to be nothing more than a pile of crisp, yellow autumn leaves. But, for True Blood’s vampires, “glamour” is a general talent for tricking humans into doing things humans wouldn’t normally do -- it doesn’t necessarily seem to change the outward visual appearance of anything.

Neither fairies nor vampires are at all sympathetic to our human condition. But, if I had to choose, I would sympathize more closely with the fairies than with the vampires. So I object to True Blood's usurpation of fey powers by the undead bloodsuckers. And, considering that the series' lead character, Sookie, is a fairy-human hybrid, I wonder whether she'll be allowed to exhibit genuine fairy-glamour powers in HBO's upcoming Season 4, or if fairies will be deprived, in favor of the stupid vampires, of their glamour -- which would be a disappointing narrative conflict.

Before watching Season 3, I had become tired of the stupid vampires, and figured I wouldn’t be ready for them again until after the next economic Misery Index cycle of recovery and downturn.

But I was wrong.

By the second episode, I was hooked. For one thing, it’s such a sexy -- if not actively pornographic -- series. Those werewolves, particularly Alcide Herveaux (Joe Manganiello, pictured), are, as my friend Chris says, “woofy.”

Apart from the sex appeal of the actors, however, True Blood is just really well written. After each cliffhanger, I was hungry for more. In fact, I devoured the 12 episodes in two nights.

Some of the season’s more loathsome characters are also its most entertaining. Franklin, the crazy vampire who kidnapped Tara, is hilariously unhinged. And the pathetic spectacle of Russell carrying around a crystal urn containing the gelatinous vampiric remains of his deceased longtime companion Talbot (until Sookie stuffs them down the garbage disposal!) is priceless.

(By the way, what is that stringy, red substance left behind after a vampire gets "staked"? I’m thinking it’s the blood vessels which, being in such close contact with vampire blood, remain intact after the muscle, bone, skin, etc. tissues disintegrate.)

One thing I’m not buying is Godric as a glowing, beneficent spirit of white light -- the Jiminy Cricket to Eric’s Pinocchio. As much as I reject the concept of a punitive Christian hell, it’s difficult for me to accept the concept of a Vampire Nirvana. Although I suppose I could get used to the idea that everyone, even these embodiments of ultimate evil, can find peace in the afterlife, it has always seemed to me that the process of enlisting in the Armies of the Undead must involve the expulsion of the human soul. Some kind of spiritual consciousness may inhabit the vampire’s mind and body, but if so, it is injected at the time of “making,” and has an altogether alien, inhuman nature.

Finally, I’ve never really liked Bill Compton. He’s the Don Draper of vampires -- not as hot as everybody pretends, but somehow his icy reserve always attracts women. As Sookie continues to copulate her way through the roster of supernatural creatures, I think she can do better. (Yes, even though everybody thinks she slept with Alcide the werewolf, she really didn’t -- but she probably should have. Still, she undoubtedly got a dose of Eric’s blood in Season 2, and who knows what she’s up to now that she’s flitting around with all those attractive, loosely clad fairies?)