Over 130 miles south of Salt Lake City at Snow College’s Sevier Valley Center, SCDG was set to play SCRG in front of a couple of hundred Richfieldians (Richfielders?) who’d never seen women’s roller derby in-person before—but not before the double-header’s undercard, a Salt City bout between Yellow and Black. Yes, just like kids’ soccer; why not some proper team names? Like, the Yellowjackets vs. the Black Mambas? Lemonheads vs. Licorice? Just spitballing.

Yellow jammers Sister Satan and Maruka put their team on the scoreboard hard and early, holding the lead for most of the first period—until Black’s RollerHer Kitty and Lady Rage answered back with a flurry of scoring that put them ahead for the remainder. Score at halftime: Black 57, Yellow 39.

Early in the second half, Yellow took back the lead and held onto it; even a late-period triple Hot Trick (passing the pack for a 5-point jam, x 3) from Black’s RollerHer Kitty couldn’t even up the numbers. Final score: Yellow 110, Black 102. 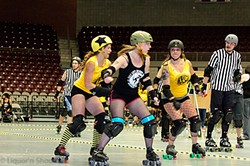 In the double-header’s main event, Las Vegas’ Cherry Potter scored first for the Sin City Rollergirls, but that was the last time the visiting team would see the lead. New Salt City Derby Girl Boston Basher laid out a 10-point jam that would set pace for the rest of the night, one that SCRG couldn’t catch up to. Both teams amped up the defense to brutal levels, but the scoring stayed consistent. Score at halftime: Salt City 45, Sin City 30.

As the second period kicked off, it was announced that this would be veteran Salt City Derby Girl Beracooter’s final game with the league—which she commemorated by delivering a dozen or so of her legendary bulldozer hits, splattering Sin City skaters to the concrete for the rest of the bout. SCRG did manage to close the point gap within 2 briefly, but SCDG soon distanced themselves, eventually racking up a 40-point lead. Final score: Salt City Derby Girls 113, Sin City Rollergirls 73.

Next Salt City Derby Girls bout: Sorry, no real schedule has been announced yet. The league is hosting an afternoon pool tournament fundraiser Saturday, June 25 at Time Out Bar & Grill (1754 W. 3500 South), and there’s a party/flat-track exhibition game scheduled at The Complex downtown on Saturday, July 9. For developments on the SCDG banked-track season, stay tuned here and SLCDerby.com.