SDG’s Prime Cuts found some much-needed focus and momentum early in the second half, but then blocker Augusta Wind was sent down hard to the concrete track and blown out of the game. JCRD kept up the scoring onslaught, eventually letting the previously unutilized Tic Tac Flo, Miss Take and Clam Jammer take turns wearing the jam star. A late-period scoring tear by Slaughterhouse’s Slim Slam Mayhem proved to be too little too late, shut down by a final coffin-nail jam by Wreck N’ Glamour. Final score: Junction City Roller Dolls 152, Slaughterhouse Derby Dames 141. 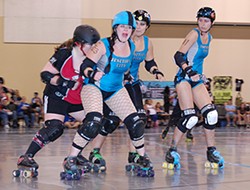 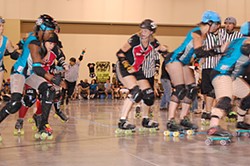 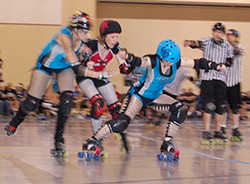 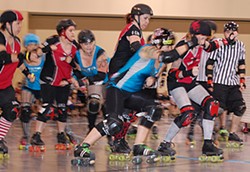 The double-header’s second bout, between JCRD’s season-undefeated Railway Banditas and always-defeated Hilltop Aces, looked to be over before it had barely begun: Within a handful of jams, the Banditas were up 30 points over the Aces, who were outmatched on every front. The Banditas did allow jammers Malibu Harpy and Zelda Cruz to make a couple of high-scoring runs, but spent the rest of the half kicking around the sky-blue underdogs. Score at halftime: Railway Banditas 74, Hilltop Aces 58.

If the Railway Banditas were (rightfully) feeling overconfident, the Hilltop Aces took full advantage by the midpoint of the second half: Back-to-back-to-back jams by Miss Take, Zelda Cruz and Malibu Harpy put the Aces up by over 15 points out of nowhere, a surprise slap that seemingly psyched the Banditas completely out of the bout. Banditas jammers Dawn Key Punch, Killa Patra and Demon Darling lost their scoring mojo and the previously impervious defensive line fell apart, with blockers like Dominique Trix spending more time in the (penalty) box than a KFC dinner special at closing time. Final score: Hilltop Aces 178, Railway Banditas 94. 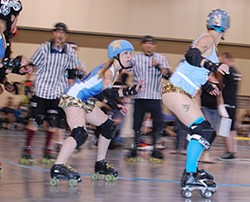 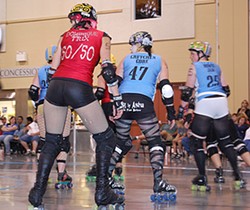