Concert review: The Civil Wars at The State Room

The Civil Wars returned to Salt Lake City for a sold-out show Tuesday at The State Room, less than six months after a series of triumphant Utah appearances during the Sundance Film Fest, and their second run proved nearly as fulfilling as the first time around.---

That’s no knock on the show. The thing is, there’s only one first time for seeing a band, and the first impression of The Civil Wars back in January was so compelling and so inviting, there’s simply no repeating that feeling. The duo of Joy Williams and John Paul White still has an intense and rare chemistry on stage, and I’m already excited to see where they take The Civil Wars from here.

Will they add a full band to their simple and winning guitar-and-voices approach? Will they “go electric” one day and shock their fans with a new, louder sound at some point? Will they show up in 2012 wearing tie-dye instead of their trademark little black dress and stylish suit (on Joy and John Paul, respectively)?

Tuesday night’s show proved once again that these kids are, barring some disaster, big stars in the making. The Civil Wars' sound is rootsy enough to attract alt-country hipsters, and poppy enough to appeal to Mormon housewives. It defies genre labels, veering from folk to country to blues to pop seamlessly. And even though the lyrical subject matter is overwhelmingly bleak if you listen closely (something Williams acknowledged in introducing one tune, “I’ve Got This Friend,” as “our only happy song”), but are delivered with such wide smiles and joyful performances that the stark and dark words go down easy.

It’s strange to say, but the duo’s stage presence is almost more important than the songs. Watching them flirt, tease each other and push each others' performances on stage is mesmerizing, and utterly different from any other band I can think of working today. 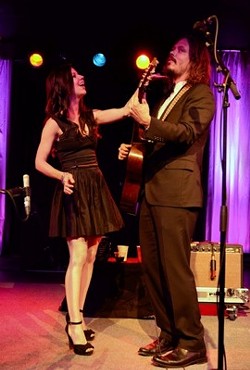 The songs, though, are what keep me going back to their February debut, Barton Hollow, between their shows. Nearly all of it was performed in their set Tuesday, along with a couple of welcome covers, including Smashing Pumpkins’ “Disarm,” which Williams and White addressed as a rare instance of shared musical influences, what with his rootsy Alabama background of country and death metal, and her sunny Cali-pop background of Beach Boys and the bands of the ‘60s San Fran rock scene. The duo’s super-slow version of the Jackson 5’s “I Want You Back” was a slinky treat, too.

Among the highlights from the Barton Hollow songs were “Forget Me Not,” performed early on and closed with the two seeing who could hold the final note the longest (White “won”). The album’s title track was met with members of the audience singing along while White’s guitar range out its most aggressive licks of the night. “Birds of a Feather,” “Falling” and “C’est La Mort” were all excellent, as was “To Whom It May Concern.” “Poison & Wine,” the song that first got The Civil Wars some national attention, remains an excellent-if-painful love song.

This was the second time The Civil Wars sold out The State Room, and when they did it the first time, their album was even out yet. Somehow I think we’ll be looking at either multiple nights or a much large venue the next time they put out an album and hit the road. 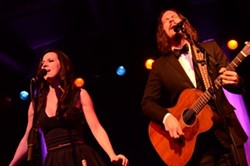 (All photos by Meredith Newsome)

Music Culture the civil wars the state room
Prev
Next