Saturday, July 9: The Salt City Derby Girls played an expo roller-derby bout in the tight confines of The Complex—flat-track-style; the previously announced banked-track is still in the “Coming Soon” stage. ---

Temp teams The Scars and The Bruises (fitting with the patriotic theme of “Red, White & Bruised”) faced off in the Grand Room of The Complex—it’s the largest room of the multi-space venue, but still a snug fit for a full-sized flat track and an audience. The blue-clad Bruises scored first, but Scars jammer RollerHer Kitty snatched the lead back for the red team within minutes. Then, Bruises jammer Bunz Bunny avoided hitting the too-close wall in the second turn by literally flying out the side door onto the Complex’s loading dock. Between the wall on the west side of the track and a metal post on the east, the track seemed only slightly less treacherous than the bizarro Mad Max tracks of the Jam City Rollergirls videogame for Wii (which is damned tricky—try it out).

The see-saw scoring continued into the bout second half, with Alevya Sufferin and RollerHer Kitty racking up the majority of hard-won points. In the bout’s final minutes, with the Bruises up by a slight margin, Scars jammer Lady Rage nearly pulled out a “Do you believe in miracles?” moment with a scoring run that looked like it might have thrown the game back in the red. No dice: After some recalculating and recanting, it was a Blue Saturday. Final score: Bruises 125, Scars 122.

Shots from Saturday’s bout by Liquor’n Shooter (Bruises in blue, Scars in red): 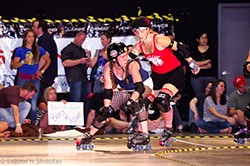