Concert Review: Explosions in the Sky at Twilight Concert Series 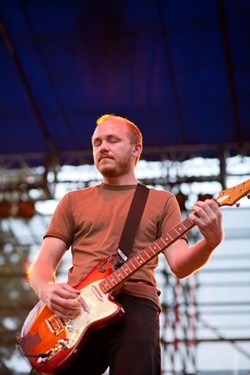 The decision to start the 2011 Twilight Concert Series off with a lesser-known experimental, instrumental rock band to avoid last year's opening-night clusterfuck paid off.---

As memory serves, the 2010 opener, Modest Mouse, saw 40,000 fans packed into Pioneer Park for a few hours, and that’s not counting the lines of folks wrapped around several blocks who couldn’t enter. Attendees were packed in so thick that a handful of them scaled the trees 150 feet from the stage, which, at times, became more of a spectacle than the concert. It was an uncomfortable debacle.

By comparison, the estimated 25,000 attendees for Explosions in the Sky and No Age last night seemed manageable, even enjoyable, in that at no point was I jostled trying to move about the park grounds or did I get drenched in beer (I consider that a glorious success). The crowd, overall, seemed well-behaved and attentive.

I missed No Age for reporting on another story, but word from several friends and colleagues was that they produced a cacophonous array of sound that leaned more towards unpleasant rumblings than music. After some announcements, Explosions in the Sky took the stage right on schedule.

Explosions in the Sky is an enigma, of sorts. The instrumental band paints a lush landscape that feels cinematic—a sonic palate that makes perfect background music or, with concerted effort, a redeeming listen . One attendee last night described them as, “They are like Enya, but, like, actually good.” That description works for me.

This review will be devoid of song names and references to albums. While many of the songs seemed recognizable enough, truth is, I don’t know them well enough. But it seemed like that was prevalent among the adoring fans at the front of the stage Crammed teenagers, who would close their eyes during the sweeping lulls and fist pump when Explosions would rock out, knew the songs, but didn’t know them—if you know what I mean. At the high moments, the teenagers would crowd surf, which the band commented on, saying they were surprised because that never happens.

More than a precise catalog of tunes laid forth in pristine order, Explosions created an array of “feelings.” It wasn’t like jazz, and it was more rock than orchestral works, although the arrangements, with guitar parts woven like a double helix, are crafted tightly and are technically demanding.

It’s like Explosions played a series of sonic short stories, all of which were thematically spun around the essence of locomotion. Their epic tunes—sometimes pushing well past the double digit minute mark—had the effused various stages of movement and a variety of ways to move, whether evoking a sense of flight or swimming in a vast sea.

All photos by Jennifer Leahy

Music Culture explosions in the sky
Prev
Next