Hello to all you paper-constructing, screen-printing, card-making, journal-publishing, dress-hemming, creature-creating, jewelry-pounding, yarn-balling, we're-off-to-the-Craft-Lake-City enthusiasts. --- We already covered this topic back on Thursday, but if you'd like to see over 500 pictures from Craft Lake City, you can check them out in this gallery here, which I'm guessing will be one of the largest galleries of CLC artists and performers you'll find online. In lieu of a 337 update this week, here's some random artwork from the streets of downtown SLC...

Surprisingly, there isn't a lot for me to bitch about this week, although it was fun giving David Burger grief and receiving supportive feedback to it. Give it time, I'm sure someone else will do something stupid soon; it is Utah, after all. We'll just get right into events this week, starting with a show happening tonight at Urban Lounge. "An Evening Of Music" presented by the Salt Lake City Film Festival will have performances from local bands, all to help benefit the festival (look down a few spots) set to happen this coming week. Go check out the show and support the fest! 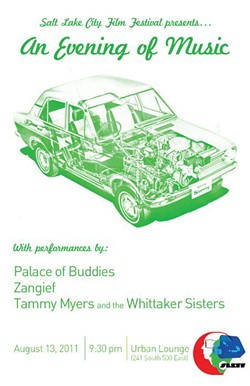 Tomorrow night, The Garage plays host to an all-day event as New City Movement and Boogie Basics Recordings present their second edition of Groove Garden. Jesse Walker, RicheBoom and Las Vegas' own Captain Jaxon will be switching off throughout the day playing the finest beats and mixes, with both bars and the kitchen open to serve your every need. Essentially an excuse to get out and enjoy yourself, the event is completely free to attend (21 and over only).

On Monday Aug.15, the art community bids a sad farewell to two of the hardest-working artists in town, as Nick & Erin Potter leave Utah. The couple are moving to Rhode Island, effectively taking their artwork and business (Potter Press) with them, and putting an end to one of the finest institutions of local art we've had over the years. With their unmistakeable artistic style, the two artists have been instrumental in helping the careers of several musicians with their gig posters, helped set the bar for DIY screenprinting, were a major contributor to the 337 Project, a staple at many artistic fairs and essentially grew interest in our art scene from venue patrons and clubgoers. If you'd like to say goodbye to the married duo, head over to Blonde Grizzly on Monday from 6-9 p.m., where they've promised to share a cupcake or two and offer several pieces of their artwork for cheap. Head on over and wish them well!

Skipping forward to Thursday, the Salt Lake City Film Festival will dominate local film from Aug. 18-21, showcasing nearly 30 films from around the globe, and a couple with local flavor attached. The Broadway, Tower Theater, Post Theater and Brewvies Cinema Pub will play host over the three-day event to various screenings; check out the Website for details and tickets. Some films with a local touch include Surrogate Valentine from Utah and SLCFF alum Dave Boyle, and Bad Fever, which was shot locally and produced by David Fetzer. They'll also be hosting various Q&A panels throughout the weekend, spotlighting some of the talented folks coming in to support their films. Simon Arthur (Silver Tongues), Dennis Ho (Subway Preacher), Lev Anderson (Everyday Sunshine) and the cast and crew from Parade will all be in town to talk about their films. Much like previous years, there are bound to be some unannounced surprises. Go check it out.

On Friday, the Copper Palate Press will have a special exhibition as SLC's own (now Brooklyn based) Nick Pedersen drops back into town to feature some of his latest works, as well as releasing a brand-new book. Not much else is being talked about the event other than music will be DJ's by Electric Space Jihad, but then again it's an unofficial Stroll event, so details are always kept secret so people will come check it out. We highly recommend attending!

Meanwhile across town, Spy Hop Productions will be throwing a Street Party, live at their main studios from 6-9 p.m. The event is to commemorate and celebrate the past year's worth of work from the students, featuring works from the various departments. It's a great chance to see some of the work being done by the program, see the talented youth in the city and possibly the future of our entertainment scene.

Then, Saturday, Aug. 20 will be the next game for the Junction City Roller Dolls at the Davis Conference Center -- a double header, in fact, as the league team The Trainwrecks go head-to-head versus The Taco Kickers from Everette, Wash. Afterward will be inner-league play as the Hilltop Aces take on The After Shocks. We couldn't find a ticket price, but we're guessing it will be $10 like previous bouts. 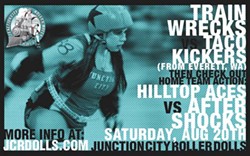 The following week is kinda dead except for this one event being held at Washington Square --you may have heard of it: the second annual City Weekly Utah Beer Festival. I could hammer the point home on this one, but let's be honest, you're going to be seeing a lot of Web banners and reminders over the next few days, so let's just mark this as a friendly reminder that it's coming in two weeks. And no, to the 40 people who have already asked and the 100 more on the way, I can't get you discount tickets or free tokens. Sorry.

As for the blog ... we'll take a look at the latest addition to Internet radio, chat with the director of a local film, visit Gallery Stroll, explore a new venue a little farther south than normal, chat video games from a local studio head and learn more about a spoken- word event with a twist. At least, that's the plan. For all I know, it'll all go belly-up like it almost did last week. As always, we'll see what happens.