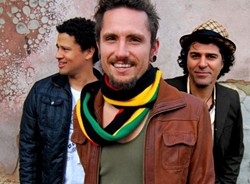 If only for two hours, John Butler created a revolution (and I’m not talking about something like “The Pepsi Revolution” or a new “hot dog revolution,” either).---

“I’m someone who believes that we can change our world for the better. I have to -- otherwise, I’d go insane. And it all starts in your mind,” said the Aussie guitarist and singer at Kingsbury Hall. This message of change and respect for cultures and for land is the thread that ties Butler’s repertoire of tunes together. And to a fervently dancing crowd, the John Butler Trio rolled out 18 of those songs on Saturday night.

The set began after opener Mama Kin—Butler’s wife—sang a soulful, quick set. Butler, joined by bassist Byron Luiters and drummer Nicky Bomba, started off with “One Way Road,” the first single off of his latest release April Uprising. Oddly enough, Butler shied away from promoting the album and other merchandise during the show -- with one exception, which I will get to later.

Other revolutionary songs included “Used to Get High” and “Revolution,” when he stopped to say the quote above. Overall, Butler was talkative, which he said is common at theater shows, and joked with the audience while still being direct with his beliefs. After playing ”Treat Yo’ Mama,” Butler described the dire environmental situation that his friends in Western Australia were trying in earnest to right. Oil companies are moving in on some of the last pristine wilderness areas in that country—an area called Kimberley—and his friends were camping out in demonstration and protest. Butler then asked the crowd to sign petitions after the show, if they wanted, that would be sent to Chevron and other oil companies taking part. For more information on Butler's work on the “Save the Kimberley” campaign, go here. Butler then played “Ocean” solo and dedicated it to everyone who was working toward environmental stewardship—down there, and elsewhere.

Other highlights included “Don’t Wanna See Your Face,” which evoked a Primus-like vibe with Luiters shining. And “Get Funky Tonight” ended the set on a dancey, upbeat footing. It’s worth mentioning that Bomba is one of the most technically skilled and interesting drummers to come through Salt Lake City in awhile.

For the encore, Butler was joined by Mama Kin for a duet. They have reworked “Losing You” for the “Save the Kimberley” campaign, and all the proceeds from iTunes downloads go to the cause. Mama Kin’s bassy crooning paired nicely with Butler; it was a shame they didn’t do more of it during the set. The concert ended with a jammy number, with the full band, and included a call-and-respond with the crowd.