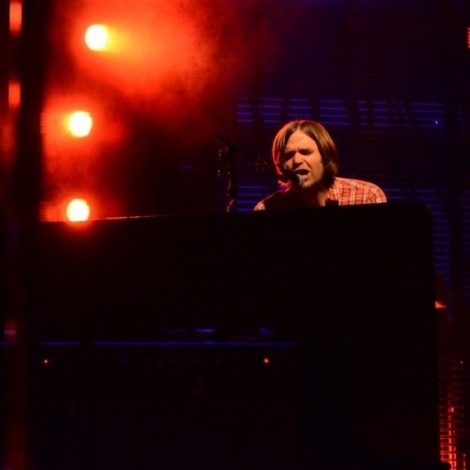 On Monday night, I decided to give the new West Valley TRAX line a whirl and see how fast I could get to the Death Cab for Cutie/Frightened Rabbit show. The ease of the commute was terrific, and the show wasn't bad, either.---

Granted, if you've seen a Death Cab for Cutie show, you kind of know what you're going to get at this point in the band's career.

You'll get selections from their back catalog that showcase the Washington crew's sterling guitar-pop, and there is nothing wrong with that. I can listen to "The New Year," Why You'd Want to Live Here," "Title and Registration" and "The Sound of Settling"—all delivered Monday—pretty much every day and never tire of those songs. And the lengthy opener, "I Will Possess Your Heart," was an appropriate microcosm of the whole show; there was drama in its menacing bass rumble, and singer Ben Gibbard threw down his guitar midway through the instrumental opening to jump behind a piano in the back of the stage. It was a fine way to open the gig, and as usual, Death Cab sounded great throughout the night.

You'll also get a dose of whatever the band's latest album has to offer, and Death Cab's Codes and Keys does take their sound in new, more keyboard-oriented directions in concert. Again, no problem; both Gibbard and guitaristist/keyboardist Chris Walla are talented guys who are pretty fun to watch on stage as they shimmy, bob and weave to their songs. Likewise, bassist Nick Harmer and drummer Jason McGerr are creative players who aren't just going through the motions on stage; they're feeling the music they're creating. 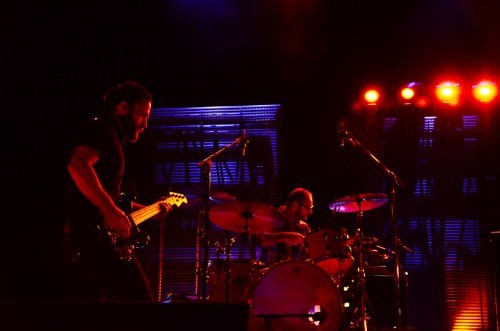 Among the new tunes showcased in the set of about two dozen songs were "Doors Unlocked and Open," "You Are a Tourist" and "Stay Young, Go Dancing."

A simple but compelling stage and light setup made it a true arena-rock version of a Death Cab for Cutie show, but the lack of people in the building indicated perhaps the band doesn't quite need an arena to play in. If I had to guess, there were probably less than 2,500 people there, and despite cutting the arena in half with a curtain, there's no denying that the energy in the room was rather lifeless given the vast swaths of empty seats. I'm sure the kids in general admission had the time of their lives, though, since there was plenty of room to move while they watched. Maybe it was because it was a Monday night. Maybe it was because it was the first day of school. For whatever reason, the show simply didn't draw.

Openers Frightened Rabbit are one of my favorite bands of the last few years, and their multilayered sound certainly can work in an arena. That still doesn't make it the ideal setting, but the Scottish band didn't let the lack of people throw them off their game as they delivered winning cuts like "Swim Until You Can't See Land" and "The Loneliness and The Scream." Here's hoping they come back for another show at The Urban Lounge sometime soon.

As for TRAX, I drove a couple minutes from my house in the Sugarhood to the Central Station on 21st South near Best Buy, and from there it was a quick 10-minute ride to a stop right by the Maverik Center. The trip itself was entertaining, with the TRAX line going over the mid-valley railyards and alongside the Jordan River Parkway for much of the trip. I definitely recommend training it the next time you're heading to the Maverik Center for a hockey game, rodeo, or even a concert that should probably be in a club instead.

(All photos by Meredith Newsome)