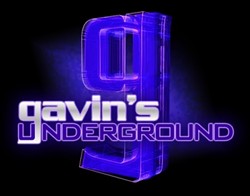 Hello to all you content-browsing, quote-stealing, cherry-picking, letter-writing, mail-littering, political-jockeying, vitriol-contributing, clearly-have-too-much-free-time enthusiasts! --- In case you haven't read Jerre Wroble's post from last week, my blog got mined for precious quotes, which were melted down into propaganda brass knuckles and then used to beat District 2 upside the head. In the spirit of researching material, I did a little researching of my own, and found out that the author of that letter (“Diamond” Jim Davis) is a magician in his spare time. Which I find quite fitting, because only a man with those skills could have pulled that hackjob out of his ass. But in reality, I'd like to thank Jim overall for giving my little ol' blog some press in media outlets where it normally wouldn't be read, and which, in turn, gave me some added readers these past few weeks. Plus, I'd like to personally thank Jim for adding his home mailing address to the top of the letter, because now I know who and where to mail the bill for using my material without asking my permission. Thank you very much, Jim, I needed a new couch. Before I go on any further (and trust me, I could) let's take a look at the latest addition to the 337 Memorial Wall.

This post is happening on Saturday, the day of our City Weekly Utah Beer Festival. This section of the post is being updated around 5:30p.m. on Saturday, where I've got a nice buzz going after having sampled several beers from around the festival and in our VIP tent. First and foremost, a mighty-big thank you to all who came out and caused the festival to sell out before 4 p.m. Now for my own personal account: Every brewer I was able to chat with had a really awesome time, and those who had complaints last year had a complete turnaround in opinion for this year. The VIP tent was very chill, as brewers came in and discussed the brewing process behind the very beer people were drinking, along with cheeses brought in to complement each drink. The music was nice, the beer was flowing. The only disappointing thing for me was the lack of roaming cheers. In 2010, someone would start a toast, and it would spread throughout the crowd like a wave. 2011: not so much of that. For those of you who weren't able to make it out, fear not, you can check out the over 250 pictures I took at the festival in this gallery here. And again, thanks to all who came and made it awesome! 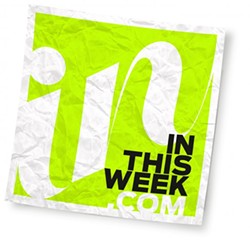 There are a couple of media changes this week worth noting, and the first is from what many consider City Weekly's competition: In This Week. Or should I say, In Salt Lake Now. Or is it just Salt Lake Now? I'm sure next week it'll be SLC Now, and then Now In SLC, followed by Now In Salt Lake, Salt Lake Now-ish, Now This Week In Salt Lake, Now This Week In Utah and finally coming full circle back to In Utah This Week. Don't get me wrong -- if you go back and look at previous posts, you'll see I have the utmost respect for the writing staff there. But clearly, this was a decision made by the heads upstairs, and the only thing they've really done is confuse readers by changing the name twice in one week, and given me a paragraph's worth of material for this blog entry. In any case, the two-year-running title In This Week looks to have been retired. Honestly, Trib, retire this puppy and give that staff the proper newspaper jobs they deserve, with a bump in pay for putting up with your bullshit. I'd much rather read Autumn Thatcher in the music area than that stale Burger you've got sitting on the column.

The other change comes out of UtahFM, where founding show “Vox Humanus” has been canceled by the station's management. We know this because the host, Terra Celeste, took to the station's Twitter and Facebook feeds to make the announcement before the last episode aired last week. The show still exists on the station Website, which hasn't had a proper update and overhaul in nearly two years, they haven't deleted the post yet (which is why this lovely picture exists below), and haven't commented on a replacement show or given reason why. “Vox” joins the growing list of shows and hosts who have departed (or have been kicked off) the community-run station over the past year, bringing up the question of the stability of both management and talent on-air. But then again, this kind of thing happens frequently with community radio stations, so it'll be interesting to see how the rest of the year pans out for all parties involved.

Moving onto events, we'll stick with UtahFM and show you the other side of this coin, as the station presents Radio Not Included: Part Deux, the yearly fundraiser for the station, where it takes over a local venue and has performances from several of Utah's finest bands and musicians. The show happens tonight (after our Beer Fest) at Bar Deluxe; check out the flyer below for details. 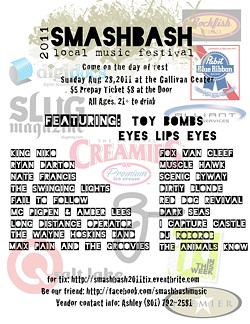 Speaking of big concerts, tomorrow, the Gallivan Center plays host to the next big local concert, the 2011 SmashBash. There's nothing spectacularly significant to the event other than it's a completely localized performer showcase in an outdoor setting, but its still one hell of an event go to check out. Twenty bands will take the stage throughout the day for cheap, $5 if you buy in advance and just $8 the day of. Head on over and check it out. 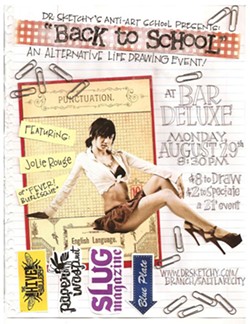 If music isn't your thing, perhaps podcasting is? Geek Show Podcast will take over Brewvies Cinema Pub all day tomorrow, recording three shows live for a viewing audience, starting at noon and followed by two films on the big screen: The Dark Crystal and Labyrinth. With the exception of the booze and food, all of this is completely free! And it may be a month late, but buy the panel some drinks as they celebrate their third anniversary since the show started back in 2008.

On Monday, we head back to Bar Deluxe for the next installment of Dr. Sketchy's Anti-Art School. This month, they break out the plaid skirts and tied-off blouses as the theme is “Back To School” night. $2 gets you in to watch women pose and artists draw, and $8 allows you to sit down and sketch out your own works.

Skip ahead to this coming Friday, where we'll see the next installment of the Rooftop Concert Series. This month, a mix of rock and hip-hop take over as Imagine Dragon and The Vibrant Sound will command the evening. Remember, this show is completely free to attend, and as has happened the last few shows, some interesting surprise guests may pop in for a song or two.

Next Saturday, the Hive Gallery at Trolley Square will host another 24 Hour Art Show. For those of you who haven't participated or seen this before, here are the basics: Artists head into Hive and pay $15 for a 12x12-inch piece of canvas ($10 for each additional one), pick up their canvases on Sept. 1st and return them Sept. 2nd. The art is then displayed for people to bid on along with judging for winners at the end of the night. For more details, you can hit up their Facebook listing here. Good luck to everyone involved, and those who aren't, enjoy the show!

Then next Sunday, Brewvies gets taken over yet again, this time by only two Geek Show types, Jeff Vice and Jimmy Martin, who will be celebrating the One-Year Anniversary of the Big Movie Mouth-Off. The duo will be doing live reviews of films for their Xfinity show, followed by their own free double feature: The Professional and Hot Fuzz. Again, this event is free (aside from the drinks and food).

As for the blog ... coming up in the next couple of weeks we'll have a live concert interview, chat art with a paint and vinyl artist, check in with the latest print and craft artist making waves, talk music with a local radio show, explore one of the city's best performance spots and get a preview of the latest haunted attraction to hit SLC. At least, that's the plan; it's kinda all in limbo at the moment. As always, we'll see what happens.