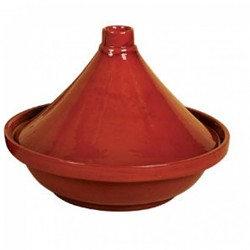 A couple of years ago, Faith bought me a tagine for my birthday. A tagine (also spelled tajine) is a earthenware pot with a cone or dome-shaped cover, a cooking vessel found all over North Africa. What am I supposed to do with this? I wondered. ---

Well, since receiving my tagine, I've tried numerous recipes out in it and this is by far my favorite: a mishmash of various different tagine recipes that I call simply Moroccan Chicken Tagine.

5 sprigs flat-leaf parsley (some recipes call for cilantro, but I don't like it) tied into a bundle with kitchen string

1/2 cup dried apricots (Turkish are best, if you can find them) sliced into slivers

Begin by roasting the almonds in a dry skillet over medium-low heat until they turn slightly brown. Be careful that you don't burn them. Set aside for use later.

Add the chicken pieces and turn to coat well.

In a tagine or large skillet, heat the butter and 1 tbsp. olive oil over moderate heat until hot. Brown half of the chicken in the oil, skin side down at first, turning over once, about 8 to 10 minutes, until lightly browned. Transfer the browned chicken to a plate and cook the remaining chicken the same way, adding any spice mixture left in the bowl. Transfer this chicken to the plate when browned. 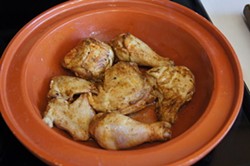 Add the red onion to the tagine or skillet and cook, stirring frequently, until soft -- about 6-8 minutes.

Add the garlic and cook, stirring for 2-3 minutes.

Then, add the parsley, 1/2 cup of water, the chicken and any leftover juices from the plate. 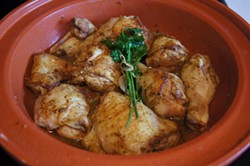 Cover the tagine or skillet, reduce the heat and simmer for 30 minutes. 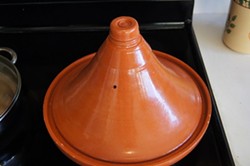 While the chicken is cooking (you can also do this ahead of time), place the sliced apricots, honey, 1 cup of water, and cinnamon stick into a small, heavy saucepan. 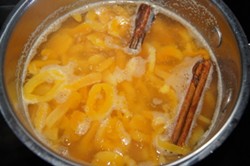 Bring to a boil and then reduce the heat and simmer for 15-20 minutes, or until the liquid is reduced to a glaze. If the mixture gets too dry, just add a little water. Remove the cinnamon stick.

About 10 minutes before the chicken is finished cooking, remove and discard the parsley/cilantro and add the apricot mixture to the tagine or skillet, along with the garbanzos.

Stir to mix well, cover, and cook for another 10 minutes, covered. 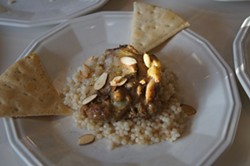 Please do try this recipe. It's pretty spectacular, if I do say so myself!