Foo Fighters rocked the Maverik Center Tuesday night (or did what they could; Maverik Center needs to figure out where it went wrong when it came to sound) to a crowd of, surprisingly, all ages.---

I won’t lie, I'm glad I missed Mariachi El Bronx. I saw them open for The Killers and was not impressed. I'm here for Rock & Roll, not Taco Bell.

Cage the Elephant, the second opening band, was a series of highs, lows, and more highs. Lows first: The sound was awful (Maverik Center, this is your first warning). After brief introductions, Matthew Shultz , the band’s lead singer, announces that their drummer had been rushed to the hospital the previous night with a burst appendix. No problem, a roadie (!) steps out in a speedo (!!) and is able to drum for a few songs. Which makes me think, “Hang on, Dave Grohl is a drummer, where is he?” Thoughts are answered when Grohl steps out and proceeds to drum their more recognizable songs, “In One Ear” and “Ain’t No Rest For the Wicked.” It’s Cage the Elephant Featuring Dave Grohl and I am at a loss for words because my jaw is on the ground.

Matthew says to the crowd, “Have you ever had one of those moments you know you’ll remember forever?” I respond, “Yeah, five minutes ago when DAVE GROHL STEPPED OUT TO DRUM FOR YOU.”

An audience member near to me is yelling “FREEBIRD”! I have never punched a frat boy in the skinny jeans before, but there is a first time for everything.

Foo Fighters begin their 24-song (!) set list with a couple of songs from their new album Wasting Light, “Bridge Burning” and “Rope.” I'm thinking, “Thank god for the speak-singing thing he does, because these speakers are obviously going to blow” (this is your second warning, Maverik Center). General admission is full where it counts, and seats are full save for one inexplicably empty section (I’m guessing it’s reserved for ghosts).

The band is definitely worth seeing live. After watching their 2011 Video Music Awards acceptance speech, you can find the rock & roll they were talking about. Their music is more metal live than on their albums, as witnessed in the performance of “My Hero,” which had a strong metal kick to it. Of course, during a drum/guitar duet, it was sadly less music and more “EEEEE” (that’s it, Maverik Center, go to your room).


It wasn’t all Foo Fighters, though. As if they had gotten my letters, drummer Taylor Hawkins sings a rendition of Pink Floyd's  “In the Flesh?” WITH LASERS! During the encore, the group also does a short cover of “Breakdown” by Tom Petty & The Heartbreakers (again, they must be paying attention to the things I want). 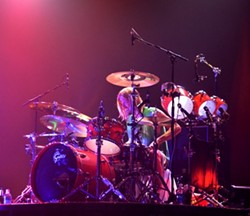 Performance and energy level was through the roof. The secret to staying skinny? Be a rock star. The stage is extended with a catwalk and a rising platform at the end, because so much rock can’t be contained on one stage. The encore is much more relaxed, with acoustic versions of “Best of You” and “Times Like These”, both of which have me peeing myself in excitement. If anything, the show has yme leaving with one question: “How does Dave Grohl get his hair so thick and luscious?” I can only dream for hair like that.