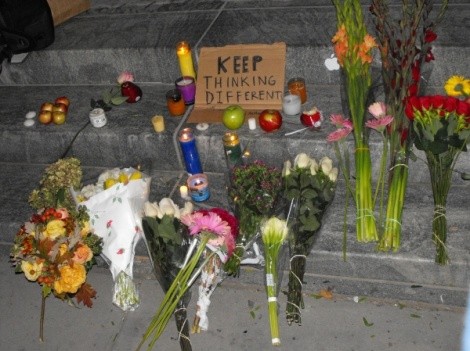 While in the Big Apple recently, my daughter wanted me to go with her to the "little apple," the 24-hour Apple Store on Fifth Avenue. --- After walking for what seemed like 20 blocks (because it was!), around midnight, we came upon a softly murmuring crowd outside the store. I was about to bail, thinking it was customers lining up for an early iPhone launch. It turned out to be fans who learned Apple founder Steve Jobs had died earlier that day. They were starting to create a memorial.

I felt a twinge of grief, especially when I saw the apples. Damn, I thought, I'm not getting verklempt about a guy who was rich and famous, invented neat shit, lived a great life, and ran a big corporation that seduces us into buying new shiny things every year. After all, the aroma of Occupy Wall Street was blowing strong in the New York City breeze.

The fact is Steve Jobs' storied creations have long oppressed me. Here I was, walking the sidewalks of New York City at midnight to shop at his 24-hour store. Not only that, once inside, we had to circumvent customers and construction workers to test drive the iMac my daughter wanted. We then electronically had to place a request for a sales person to help us. He arrived to suggest we come back later because of the construction. "If you come back in two weeks, you won't recognize the place," he promised. Not that I'd be around then, but OK, we complied.

Even as people began to memorialize Steve Jobs in the following days, I could only reflect on my long history of Apple oppression, going back to my first work computer -- a Macintosh -- that looked like a chubby gray shoebox sitting upright on my desk. It kept seizing up in the middle of big projects, and I'd lose my work time and again. Once, it even emitted a little puff of smoke. I grew to hate it.

My work life has been shaped by the computers on my desk when I "assumed the position." I've since used a Power Mac G-4 and a Mini Mac. Today, I write this blog on a sleek iMac. I've become a veritable Apple acolyte, even though these products own me. Here I sit, willingly glued to the keyboard and screen, day after day. These devices possess me and millions more like me at home, at work, on the train -- even at the lunch counter. We are seldom not connected. We should resist. Yet I remain ever curious about the next one, the new one, the bigger one, the smaller one.

A few days later, I once again found myself in an Apple store, this time on the Upper West Side. My daughter finally made her purchase, which came in a big box that we schlepped across the street to the movie theater where we watched a movie about robots. Then we hailed a cab and schlepped the box to my daughter's Brooklyn apartment.

Then we stayed up late playing around with a photo app that makes you look like an alien. The oppression never ends.