'Like There's No Tomorrow' Does Its Job | Buzz Blog

The world premiere of this season's Warren Miller film, Like There's No Tomorrow, packed Abravanel Hall Friday. The sold-out event was expertly organized. There was a mini-village in the courtyard of the venue with sponsor booths for local resorts, ---ski and gear brands, plenty of swag given away and the great hoot-and-holler energy that's always the best thing about a Warren Miller movie.

Upstairs, there was a pre-party for a large list of invited guests, with endless delicious appetizers, while some of the film's skiers, snowboarders and photographers mixed and mingled upstairs with the invited and downstairs with audience crowds. 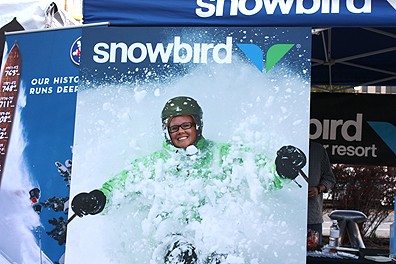 Abravanel Hall's courtyard offered sponsor booths and prize drawings that included skis, a snowboard and goggles. The Snowbird cutout was a popular photo op. Here, the face is filled in by the resort's PR head, Emily Moench.


The film performed its unstated mission: to amp up everyone's snow hornies and get them jonesing for the lifts to start. But ...

The last Warren Miller film I watched on the big screen was so long ago that Warren himself narrated it. Like There's No Tomorrow is the 62nd film bearing his name, and the aging action-movie pioneer has little to do with today's product.

Which is too bad, because despite the great premier event, it seems the Warren Miller folks have lost touch with their audience. Even though the beginner who falls getting off the lift and struggles to get up became a cliche, it was a funny cliche that audiences liked.

There was no humor in this year's film. In fact, there really wasn't much that viewers could relate to. The first dozen times you see helicopters deposit star skiers and snowboarders on top of a vertical peak with untracked powder, then watch them arc turns through the white stuff, it's exciting and satisfying. After a while, it becomes repetitive. The second part of the film, after the intermission, was mostly one- to three-second shots of more of the same. The camera rarely lingered anywhere. That was most noticeable, and unfortunate, in the point-of-view shots. One of the pleasures of a Miller film is watching a run from the athlete's POV, giving the viewer a visceral feel for the speed and the snow, putting the viewer inside the action. A three-second shot doesn't do it.

Jonny Moseley's great narration would have been improved by giving him something funny or sarcastic or poignant to comment on. Another improvement would have been name titles under the head shots of brief comments by various athletes. And while it's an adrenaline rush to see daring runs down mountains that we, the audience, will never get a chance to experience, that's not all there is to a good ski film. Next year, include the rest of it.