We close out October's releases in an unorthodox style, but hey, it wouldn't be an accurate report on the local music scene if it didn't include some releases that you had to mine the depths of the underground for. --- The first album we're gonna start with is the latest from Blitzkrieg Witchcraft. The last time we heard from the group, they had released their Burst Of Fire demo and had been on a roll of playing more experimental and harder shows. That's about it to report from the past as the band has refused to make any kind of Website or social network page, forcing any fans to keep in touch with the members personally to find the next live show. The group recently recorded a live album from Raunch Records, fittingly titled Recorded Live At Raunch. It's about as punk a recording as you can get, complete with album sleeves made with printer paper and a Sharpie, featuring a track or two with Raunch founder Brad Collins on drums. Given the title, it's probably a safe bet that you'll only be able to pick up the album at Raunch, so head over and show the shop some love. In lieu of a proper cover, here's the shop's logo. 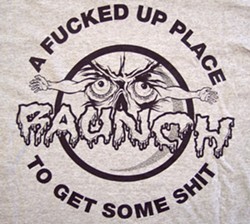 Speaking of bands who have played at Raunch, Dick Janitor have an album out. This three-piece girl punk band out of Provo have been on a roll lately, hitting up every venue they can since starting up earlier this year. Not a lot to really say beyond that, as they have yet to really establish themselves, but their set is pretty damned good and it's worth checking them out live. The trio released a self-titled EP a few weeks ago, selling nearly every copy of the first run. Hit them up for one at a show.

Moving onto rap, we check out the debut album from B-Side. A relative newcomer to the SLC music scene, B-Side was raised in Rose Park and grew up living the gang life, and according to his bio, at one point was forced to leave the state and legally could not return until he turned 18. His experiences pushed him toward writing and performing, which translated into his passion for rap and got him into doing live shows. You can check out his full-length debut album%uFFFDB Myself And I%uFFFDover on Green Light Records' Bandcamp site, and purchase a physical copy for $10.

Next up is the latest from electronica act jazzsequence, a one-man act from the mind of Chris Reynolds (kinda seen above) who has compiled ambient, experimental and industrial music into a NIN-type project. Reynolds has been putting out releases for nearly five years under the moniker but hasn't really received the kind of exposure you'd think he'd get from fans or even community-radio shows catered to the genre. Earlier this year, he released his third full-length album,%uFFFDWasp, and has now followed up that with an EP titled WASPREMIX. As you may have gathered from the title, the six tracks are remixes of songs from the main album. If you're into the genre, I strongly suggest you check out more of his work, which you can listen to and purchase off his Bandcamp site.

Finally, we get to the only release show of the week, and it comes from our old friends in Fox Van Cleef. The band has already been written up in last week's CW issue by Kelli Stitzer, so rather than rehash over what's already been written, let's talk about the album:%uFFFDPrescription Tea Party. Much like their EP Pleasure Junkies, this is almost a complete departure from their previous release. One of the biggest things that's kept the band relevant during their run in the scene is the ability to change and reinvent their sound. If you compare all three releases they have out, they sound like three different bands who all share some resemblance, but aren't quite the same and could be mistaken for different acts. It's definitely worth checking out. You can catch their release show this Saturday over at The Garage as part of SLUG Magazine's “Day Of The Dead” party, playing along with DJ Curtis Strange, Max Pain & The Groovies. This is going to be one hell of a packed show so get in while you can; it's just $6, starting at 8 p.m.