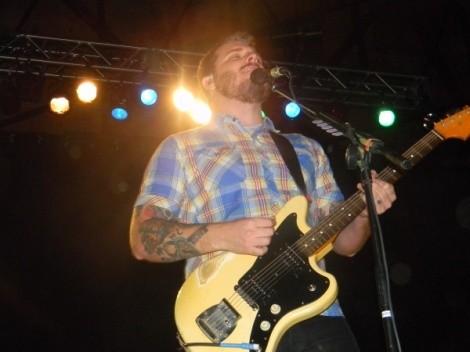 Sometimes, concerts are a sensory overload because the stage is too cluttered with visual art, crazy pyrotechnics, animation or props to focus on the music. I think the best kind of show happens when the stage is made up merely of the band members and their instruments, and the intricacies of the well-crafted music is allowed to really shine.--- That was my experience at the Thrice show at Saltair on Tuesday night, which was part of a tour in support of their new album, Major/Minor.

Thrice played an incredibly strong set that started with their newest material and worked backward through their entire musical catalogue, to the delight of the huge crowd of devoted fans. With hardly an introduction, Thrice opened the night with the searing "Yellow Belly" from the new record. They followed that with "The Weight," from 2009's Beggars, and "Promises," another new song, which was an obvious crowd favorite. I've been to shows where the frontman had to coax the crowd to participate; that was far from the case here. The crowd reacted to each song in unison, all led by singer Dustin Kensrue's quiet charisma. Next, they played "All the World is Mad" and "In Exile," both from Beggars, and Kensrue's powerful voice hit every note perfectly, especially during the soaring choruses. I was happy they played one of my favorite songs off Major/Minor, "Call It in the Air."

After a block of newer songs, Thrice stirred the crowd into an explosive frenzy when they suddenly blasted into "Cold Cash and Colder Hearts," a longtime fan favorite off of 2003's The Artist in the Ambulance. A nice surprise during that song was the fact that lead guitarist and keyboardist Teppei Teranishi sang almost as much as Kensrue. The ridiculously talented musician definitely proved his singing chops.

By far, my favorite moment of the night happened during "The Earth Will Shake," from Vheissu. Just when Dustin was singing, "We dream of ways to break these iron bars," to everyone's amazement, six additional drummers rushed onto the stage, each carrying either a snare or a floor tom. They formed a ring at the center of the stage and joined in with drummer Riley Breckenridge for the powerful final chorus, shaking the stage -- and everyone's eardrums -- to fantastic effect.

There was no way an audience of such devoted fans was going to let Thrice leave without an encore, but it didn't seem like the band members themselves wanted to leave. After only about 20 seconds of audience shouts of "One more song!" Thrice came back onstage and, grinning from ear to ear, tore Saltair apart when they launched into "To Awake and Avenge the Dead," from 2002's Illusion of Safety. It was a moment of complete nostalgia for many fans and a throwback to Thrice's early post-hardcore music, and a mosh pit formed that was the width of the entire audience. For the final chorus, Kenrue finally abandoned his reserved distance from the crowd, climbed off the stage and stood on the shoulders and hands of enraptured fans as he screamed the lyrics.

It doesn't matter if you'd never seen Thrice live before this show. They played such a diverse collection of their songs that this concert felt like every amazing show Thrice has ever played, rolled into one dynamic, powerful night.

For a review of Major/Minor, click here. (All photos by Brandon McConnell.)