In its nearly seven-year run, Make has done more than just showcase projects and creations coming out of the woodwork, but also inspired people to create their own. --- In fact, it's been influential in helping “makers” across the country push themselves in a more DIY lifestyle, and even had groups spun off to form collaborations in various cities. Make:SLC was founded in 2009 with the goal of bringing together a collective of creators within our area to not only invent new things but to also educate those wanting to learn more in various fields. Today, we're chatting with several members of the group about the work they do. (For this interview, some chose to speak for themselves, and others were representing the group.)

Gavin: Hey, everyone. First off, tell us a little bit about yourselves?

Gavin: What first got each of you into computers and technology and what was it like learning it growing up?

Devin: When I was a kid, we had a really old TRS-80. I read the books and taught myself basic programming from scratch.

Tim: I got old computer parts from my dad and built them.

Tracy: Steam engines, 1963, I worked for the Smithsonian Institute. I serviced a remote astrophysical observatory.

James: I started on the Atari 400 in junior high and kept going.

Gavin: What initially drew each of you toward being a maker and learning the skills and techniques behind it?

Devin: I used to take everything apart and learned how it worked.

James: Most of us just want to make our own stuff and learn how stuff works.

Gavin: When did each of you end up meeting each other and eventually come to form friendships?

Michael: Make:SLC is a group of people who enjoys reading Make. We enjoy coming together to share projects and ideas. Those projects can range from simple woodworking projects to grandiose Burning Man light installations.

Gavin: How did the idea come about to start up this organization?

Michael: Make:SLC has its origins with the Make:SF group that I was a part of when I lived in the San Francisco Bay Area. When I moved to the Salt Lake City Area in 2009, I organized Make:SLC.

Gavin: Where did the name Make:SLC come from and what's the meaning behind it?

Michael: Due to meeting space issues, Make:SLC failed to gain a permanent space until July 2010. James Howard and Richard Thomson got together to resurrect Make:SLC. Richard, who is creating a computer-graphics museum, had some space to share. It soon became obvious that as we met more and more, more space was needed for our activities. The search for more space was started in earnest in the spring of this year. We found the present space at the end of the summer.

Gavin: I understand you created a workspace to work from. What made you decide to create a central point for everyone and what was it like setting it up?

MSLC: We wanted a place for people with similar interests to gather and work on projects. It is not easy keeping the space going. But we manage.

Gavin: For those who may not be in the know, what exactly does an organization like yours do when you come together?

Richard: We discuss projects and work on them.

Tim: We collaborate on projects to improve them and make them better. 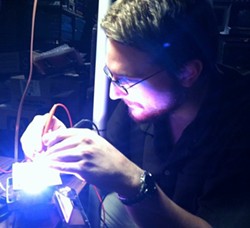 Gavin: Since forming, what kind of things have you been working on and how has it been making things with additional help?

MSLC: We have made several things as makers, but it is always easier with more help. People can give you more ideas and also help you refine your own.

Gavin: What's the overall goal of the group and what do you hope to achieve down the road?

Richard: Our goal is to increase member participation and grow the community of makers so that we can afford more shop space and more equipment.

Gavin: Branching out a bit, whats your take on tech these days and how far people have come, as far as technology and skills?

MSLC: Technology has come a long way for makers -- 3-D printing and making our own circuit boards. Having a CNC machine is nice.

Gavin: From a tech standpoint, where do you see technology going over the next five years or so?

Tim: Smaller and faster and mobile.

Gavin: What can we except from all of you and Make: SLC over the rest of the year and going into next?

MSLC: Bigger and better projects. Classes for the public on electronics. And hopefully, we can get a laser cutter.

Gavin: Asidefrom %uFFFDthe obvious, is there anything you'd like to plug or promote?

MSLC: Yes, come down to our free night every Wednesday from 7-10 p.m. at The Bayou and see what we do. We always welcome new people.