Concert Review: Trampled by Turtles at The Depot | Buzz Blog

Concert Review: Trampled by Turtles at The Depot 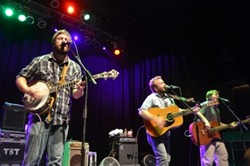 The scene at the Depot on Tuesday night reached a raucous level of high-energy thanks to an invigorating performance by Trampled by Turtles, especially considering the show of hands when mandolin player Erik Berry asked how many folks had to work in the morning.---

Opening act William Elliot Whitmore revved up the crowd with his solo set on guitar and banjo, crooning in a Southern twang between sips of whiskey from a bottle at his feet. By the time TBT took the stage, the electricity in the room was almost audible, and the crowd was on edge. All it took to send them over was TBT's sudden breakdown into a jam session after the first few songs, and from then on there was barely a seated person in the room.

Originating in Duluth, Minn., TBT has been blazing a red-hot trail through alternative and bluegrass music scenes since 2003 with their famously fast-paced playing and poignant lyrics. Featuring Tim Saxhaug (bass), Dave Carroll (banjo), Erik Berry (mandolin) and Ryan Young (fiddle) and lead guitarist and vocalist Dave Simonett, this string-plucking quintet exudes a super-human energy force in every performance, which guarantees that you will be tapping your foot along with the rest of them. Notorious for staying seated during earlier shows in their career before consciously deciding to play standing up, TBT graced Salt Lake City with another stand-up show, and their body language was far from static.

Fiddle player Ryan Young was especially dynamic, dipping and swaying along with his melodies, pigtail braids flapping, and all the while producing some of the most emotionally charged, knife-in-heart fiddle music possible. In fact, he was so continuously in motion that it was impossible to get a picture of him in focus (as seen below).

The band played everything from old songs to newer to not-yet-released, but the majority of the show was from their most recent album, Palamino (2010). Some highlights were “Victory,” “Feet and Bones,” and “Help You,” as well as “Codeine” from their 2005 album Blue Sky and the Devil -- and, of course, the much-loved and, appropriately much anticipated “Wait So Long,” which practically sent sparks flying from the guitar picks and fiddle bow. TBT has succeeded in taking a fully formed, classic American-music genre and making it entirely their own, so much so that their progressive, alternative bluegrass seems to have sprung organically from the ground they walk on. When asked what the most difficult part of being on the road is for them, Simonett replied, “We don't even have to try; everybody's into it. We all make sure we try to do it exactly the way we want to.” This sort of cohesion and dedication is clear, both in their music and in their poised gratitude for fans. “Thank you guys, so much,” Simonett said near the end of the set. “You guys don't even know how much this means to us.”

Actually, we do -- the audience couldn't help but receive all that crazy-jumping-energy and send it right back to TBT with uproarious applause and a request for an encore. The wish was granted by both TBT and Berry, who played his own rendition of “Angels We Have Heard on High” from his solo holiday album. Needless to say, TBT will be welcomed back in SLC anytime --weeknights included.