Last month, the Tower Theater held its last Open Screen Night of 2011 for a nearly packed house and with an unpredictable set of films. --- For those who haven't attended, these shows have picked up a lot of steam since starting back in 2007, and as the series approaches the five-year marker, we're seeing a lot more college students bring their skills up to take on those who have mastered the art.

For November's event, we saw two big winners: Filmmaker Augusto Zegarra took home both the Critic's Chose Award and the Audience Choice Award for his short piece Paredes Mudas, while Gus Koshy earned the SLFS Choice award for his film Catch & Release. Today, we chat with Zegarra about his work and the film, along with thoughts on the competition and making local film. (Gus Koshy could not be reached for an interview.) 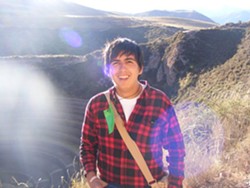 
Gavin: Hey, Augusto. First off, tell us a little bit about yourself, and how you got into filmmaking.

Augusto: I was born and raised in Lima, Peru. I am not sure of how I got into it. I think that since the first time I went into a theater, I was impressed by these images on the screen. I knew I liked it a lot; I still get marveled by it. Then as a kid, both my sister and my brother were a big influence in watching more and more films. It was also a family tradition to go every Sunday to catch a movie at the theaters. When I came out of high school ,I thought more seriously of the option of getting into film, studying it. I had been thinking of the idea for a few years, but it was in 2008 that I was sure I wanted to pursuit filmmaking, at least for now. I was very privileged and fortunate to have the support of my family to come from Lima to Salt Lake City to study film in 2009. Ever since that, I've been getting into the making of films. Still very much in the process of becoming a filmmaker.

Gavin: What films and directors would you say had a big influence on you?

Augusto: Many films and directors come to mind with this question, so to keep it short I'll have to sacrifice mentioning most of them. One in particular that I remember influenced me a lot was Dark Eyes by Nikita Mikhalkov. I remember thinking as walking out of the theater of how moved I was by the story. Then I was ecstatic. It was very inspiring; that's one of the films that confirmed my suspicions, that there was no other way but to make films. When it comes to directors, some that are very inspiring to me are directly from my hometown: Claudia Llosa and Josue Mendez.

Gavin: Did you seek out any college for film, and if so, what was that experience like for you?

Augusto: I was studying Audiovisual Communications in the PUCP in Lima, which is a great place but unfortunately didn't teach film as a career, so I decided to look for options out of the country. That's how I ended in the program at the University of Utah. My experience there was wonderful. Just as the city in general, I thought people were very welcoming and kind in the film department. I learned a lot from some teachers that inspired me, and that are now more friends than teachers. From my peers, I made some really good friends that I want to keep with me and that I'm looking forward to create with.

Gavin: How did the concept for Paredes Mudas come about?

Augusto: Paredes Mudas is a story that is part of a bigger project, called Family. In a way, the concept for this short film came from my desire to make films back at home. Although I was exposed to it prior to moving into the States, the topic of immigration became more familiar to me once I moved here. I think immigration in general is one of the most important topics on the political table right now, at least to me, so I knew I wanted to write about it. That's how it started and then the rest of the concept came along with the process of writing it.

Gavin: How was the experience for you in doing both initial casting and also finding the locations to film for this particular piece?

Augusto: It's not particularly easy to find Spanish-speaking actresses in Salt Lake. I had the luck of meeting Liliana in school one day and then I met Jessica through her. The location scouting was, I thought at the beginning, a bit of a problem, but then I realized that like most of the times, the solution was right in front of my eyes. I shot the piece in my house. Jessica Carlson, my set designer, helped me re-do the painting and rearrange the space for what was needed.

Gavin: What was it like on set during filming? And how long did it take you to film and then edit?

Augusto: Being on set was great. I felt it had a great vibe; we were a small crew, conformed by six people -- Conor on camera, Jeremy on sound, Ruben as a gaffer/clapper, and my two actresses, Liliana and Jessica. We shot the whole piece in a span of two days -- a Wednesday afternoon and then a Thursday morning. We finished all the editing including all the post-production in three weeks.

Gavin: Did you show the film to anyone prior to the event, and, if so, what did they think of it when it was finished?

Augusto: No, it was the first time I showed it to anyone outside of the crew; it was recently finished, too. In fact, due to life circumstances, I still haven't been able to show this "final" cut to some members of the team. That, right now, is very high on my to-do list.

Gavin: How did you hear about the Tower Theater's Open Screen Night?

Augusto: I think for this occasion I heard of it through the word of mouth. It was my desire to be able to see the short film on the big screen, and the Open Screen Night was the ideal situation for that. I am very grateful for what the Salt Lake Film Society does for the local community with this event in particular.

Gavin: What was it like seeing it there and hearing the audience reaction?

Augusto: Seeing it there was great. I love that theater. I was happy with most of it and it allowed me to re-check some things I still want to fix with the color and sound. It was also nice to hear a positive reaction from the audience. 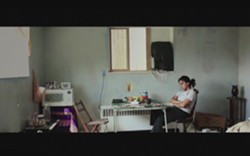 Gavin: At the end, you won both the Critic's and Audience Choice awards. How did it feel winning those and receiving that recognition?

Augusto: I'm happy that it was well received; more grateful than ever with my team of crew and actresses.

Gavin: Going local, what’s your opinion of the local film scene, both good and bad?

Augusto: I can't say I know much of the local film scene, but of what I've seen there is talent and there is still space to grow. I feel very fortunate and grateful that I have met great people in this city that do this --people that I not only enjoy working with but that also allow me to learn from them and their work.

Augusto: More of the same. I would say, if you can, always try to support the arts, help a friend, help a stranger, go out and make a film yourself.

Gavin: Are there any local directors you feel are at the top of their game?

Augusto: I feel that many of the ones I've seen are getting to that level. But really, most of the directors I have seen work are as myself, also just starting in this.

Gavin: Do you know what you’re doing for your next film, and what can we expect from you the rest of the year and going into next?

Augusto: I already shot another project after Paredes Mudas, called Winaymanta, a short film that I've been waiting to shoot in Lima for quiet a while. This one also a part of the project Family. I'm very happy that I was able to shoot it and to work with an amazing team of people in Peru. As we speak, I am in the process of editing this short film; very excited for what's to come. Hopefully, next year I'll be able to finish preparing to shoot a feature film. We'll see what happens.

Gavin: Is there anything you’d like to promote or plug?