Since we've recently raked the Deseret News over the coals for its front-page headline fiascoes, we can't really give The Salt Lake Tribune a pass on its own infractions. --- (I hasten to add that City Weekly is not without its own typo sin. However, when the state's largest-circulated daily newspaper falls into a headline quagmire, we're obliged to report it.)

The Trib's Tuesday, Dec. 27 headline"Is Utah's Beer Tax Money Misued?" is problematic on at least two levels. First, it's the front-page headline. 'Nuff said. Secondly, it's a typo on a booze story. Booze stories always create a stir, with or without a mangled headline. Add a typo, and lawmakers will make some cosmic connection that it was actual beer consumption by page designers and copy editors that caused the error. Then, a new restrictive law will be proposed at the Legislature. That's how it works.

On Dec. 24th, it was the Trib's headline using this hackneyed cliche that caught the eye of at least one grammar nerd.

"Yes, Virginia, there is no Newt (on the ballot)

It was such an atrocity that a fifth-year linguistics graduate student at UC San Diego named Gabe Doyle, who operates Motivated Grammar, singled out the Trib's as "the worst 'Yes, Virginia' headline of 2011." He writes: "Whereas most Yes Virginias spawn from a lack of creativity, in this one, the writer was even too creative. Not many could have managed to make such an abomination, such a square-peg-round-hole sort of a sentence; this takes a real sense of purpose, a desire to keep going when all those around you say it can’t be done. This is the headline of a man on a mission, someone who said 'Virginia and Christmas, there’s a joke in there' and wouldn’t give up without finding one."

A few days earlier, the Twitter universe was treated to the sound of Tribune reporter Robert Gehkre's brain exploding over his discovery of a typo in the subhead of a Dec. 20 story he wrote. The subhead tells the reader that David Cooke is running for governor, while the body of the story says it is Peter Cooke.

Finally, let's look at the headline announcing the end of the Iraq War, which most daily papers covered on Dec. 16. The Trib is not the only daily that played it down (a sampling of Dec. 16 newspaper front pages can be viewed at Newseum here, and it should be noted the Deseret News didn't even bother to put the end of the Iraq war on its front page, but rather teased it in a skybox and relegated it to A-2!) 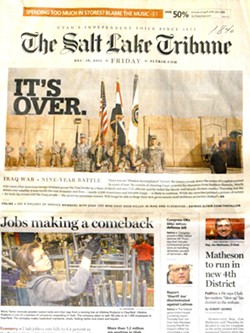 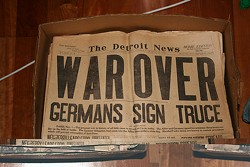 Anyone got some beer we can misue?