Over the past couple of weeks, people have been asking me, “Wolf, why the hell didn’t City Weekly do a top-10 hip-hop albums list for 2011?!” and the answer is simple--I don’t know. ---Perhaps I was supposed to do it, and if that’s the case, I apologize. But one thing is certain, 2011 was a golden year for hip-hop and there was barely a whisper of any rap albums in the CW year in review. However, it’s not CW’s fault. I imagine the majority of people who work here do this whenever they hear anything that remotely sounds like rap (that link may have just cost me my job). So if it’s not too late, I'd like to stitch this thing up.

Don’t let SLC fool you -- people here like hip-hop, besides the fact that 90% of the kids you see out at the bars look like this guy. In fact, Salt Lake City has a discerning appreciation for rap music, and the evidence can be found in past shows like DJ Abilities and One-Be-Lo at Wasted Space, the How the Grouch Stole Christmas tour at Urban Lounge, and the advent of upcoming shows like the Cool Kids, People Under the Stairs and Flying Lotus.

So in an effort to remedy the situation, I’ve whipped up a pretentious, self-serving list that should no doubt make me sound like a know-it-all arrogant hip-hop turd … and with that, I give you the Secret Handshake’s top-10 hip-hop albums of 2011. Let the angry comments start … now:

A pioneer, if not spearhead of the “based” hip-hop sub-genre, Clams Casino’s free album is an ample serving of sub-woofer meatloaf. This glitch- filled collection begs to be rapped/spoken over, which is perhaps why Clams Casino has been busy producing for such artist as Lil B, A$AP Rocky, Toro Y Moi and James Blake. This album is such a melodic head-nodder that I like to imagine Jay-Z playing this album for his daughter when it’s nap time.

Tyler and his crew, Odd Future Wolf Gang Kill Them All (OFWGKTA), have been quietly making fun of rap music for the past couple of years and have finally gotten affirmative nods from the Internet fish tank. To them, rap music is shit, and everyone involved in the industry is the butt of their inside jokes. So far this approach has been working out pretty well. I think it’s safe to say that Tyler’s 2nd studio album, Goblins, is the reason why John Cena needs to stop rapping.

This is an album that needs to be played in your car for the next 3 months. No one is doing anything remotely close to this Seattle duo. Shabazz Palaces consists of Palaceer Lazaro (of Digable Planets) and producer Tendai Maraire (son of famed Zimbabwe musician Dumisani Maraire). At first listen, it’s hard to place their music into any one category. I suppose their music aligns with rap, but take that element away and you’re left with the rhythms of a blunted David Bowie. This album is a glimpse into what I imagine rap will sound like to the fucking Jetsons.

Last year, I interviewed rapper and producer Eligh (of Living Legends). During the interview, we must have spent half an hour discussing how dope Khalifa is. At one point Eligh said, “Man, I don’t know what it is … but there’s something about Wiz Khalifa.” I think he’s right. Khalifa isn’t necessarily a lyrical genius, but he knows how to put it all together. What's funny to me is how much flack he gets from the hip-hop elitists. They need to lighten up and just enjoy what this guy is doing.

It seems like the pairing of Gary, Indiana, native Freddie Gibbs and rap-producer-god Madlib was probably inevitable. Freddie Gibbs may very well be the hardest rapper who’s not from Brownsville, NY, and though seemingly menacing, he delivers his message with a calculated, intelligent approach. Gibbs is the anti-Drake, and he reminds me of the time when Talib Kweli had a fire in his belly. Try listening to this album while reading the New Yorker and sipping on a Kombucha; it’s ridiculous.

Mississippi rapper Big K.R.I.T. raps like a seasoned blues player. He has the uncanny ability to sew soft hooks with punishing lyrics. Oftentimes, the term “Conscious Rap” is over-used and aimed at anyone rapping in a hand-knit beanie. But K.R.I.T. is able to spit his Southern rap message without sounding like a know-it-all trust-fund baby. Return of 4eva is free for download so there is no reason you shouldn’t own this album.

When this album dropped, the first thing that my friends and I said was, “Finally, Common is rapping again!” For the time being, Common has decided to shake the shitty Tyler Perry acting bug and spent some time in the studio with childhood friend and producer No I.D. The result is an album dripping with slap-happy ghetto anthems. The first single, Ghetto Dreams, is a testament to way back when Common put out quality albums like Be. Welcome back to rap Common.

More often than not, all-star parings will fall flat. Just look at those Pizza Hut/Taco Bell hybrids. This is not the case with Watch The Throne. But before I get into how great this album is, I should mention that I’ve never been a huge fan of Kanye West. Seriously, I feel that you could pair a California Raisin with Jay-Z and it would still sound tight. Maybe that’s too hash. But Watch The Throne, despite Kanye’s douchyness, is still an unbelievable album. 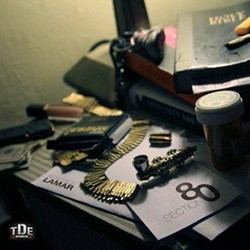 At the impressionable age of eight, Kendrick Lamar was on the set of Tupac Shakur’s video California Love, a moment that he says changed his life forever. As a Compton resident and member of the celebrated rap collective Black Hippy, Kendrick Lamar rhymes like he’s the lost son of N.W.A. However Lamar does not, by any means, resemble a “gangsta rapper,” but more specifically he’s a West Coast fusion of Tupac wit and Aceyalone pedigree. Section 80 is why we should listen closely to rap music.

Queens native Action Bronson takes a style of rap once found in mid ‘90s Wu-Tang and reshapes the old formula into something fresh and tangible … like food. Shit, he raps about food non-stop. This may be due to that fact that he was actually a culinary student in Tuscany. But as much as his subject matter sounds ridiculous, his delivery and lyrics are smart, fast and thoughtful. To me, listening to this album is like eating a cold pack of hot dogs while driving an El Camino at five mph. In other words, Action Bronson reminds us that rap doesn’t need to be that damned serious.